The ‘Pledge of Allegiance’ (Bay’ah) allows Muslims to demonstrate their complete acceptance of the Divine appointment, and authority, of the Khalifah and so testifying that the Khalifah is the representative of God on earth. The word Bay’ah (بَیعَ) literally means ‘to sell’ something and in this instance can be interpreted as one offering themselves to the will of the Khalifah in all that is good[1]. Perhaps the most famous example of the Bay’ah was Muhammad’s(sa) journey to Aqaba where 12 people from Yathrib pledged their allegiance to Islam in what is commonly known as the Pledge of Al-Aqaba. Another example of the Bay’ah during the life of the Holy Prophet(sa) is recorded by Hazrat Jarir(rh) who narrates[2],

‘’I have given a pledge of allegiance to Allah’s Apostle for to testify that None has the right to be worshipped but Allah, and Muhammad is His Apostle, to offer prayers perfectly, to pay Zakat, to listen to and obey (Allah’s and His Prophet’s orders), and to give good advice to every Muslim.’’

The Holy Prophet(sa) took the Bay’ah from ladies as well as men, however, it was not his practice to allow women to place their hands upon his hand. Instead it would be sufficient for them to repeat the words of allegiance after the Holy Prophet(sa) recited them.

The Bay’ah was also offered to each of the Rightly Guided Khulufah (Khulufah-e- Rashideen) upon their elections as a sign of allegiance and acceptance of their appointments. By way of example, Hazrat Abu Bakr(rh) took the Bay’ah of the Ansar and Muhajirun upon becoming Khaliaftur-Rasul. It is recorded that on taking the oath of allegiance Hazrat Abu Bakr(rh) imposed the following obligations upon those wishing to offer their Bay’ah[3],

‘’O People, I have indeed been appointed over you, though I am not the best among you. If I do well then help me; and if I act wrongly then correct me. Truthfulness is synonymous with fulfilling the truth, and lying is tantamount to treachery. The weak among you is deemed strong by me, and until I return to them what is rightfully theirs, Allah Willing. And the strong among you is deemed weak by me, until I rightfully take from them what is rightfully someone else’s, Allah Willing. No group of people abandons Jihad in the way of Allah, except that Allah makes them suffer humiliation. And wickedness does not become widespread among a people, except that Allah inflicts them with widespread calamity. Obey me so long as I obey Allah and His Messenger. And if I disobey Allah and His Messenger, then I have no right to your obedience. Stand up now and pray, may Allah have mercy on you’’

Similarly, in May 1908, following the death of the Promised Messiah(as), the First Ahmadi Khalifah(rh) issued an admonition to those wishing to offer their Bay’ah at his hand by saying[4],

‘…if you want to do Bai’at at my hand, be very clear what Bai’at means. Bai’at means to sell yourselves. A man eschews everything and that is why Allah has called his man ’’Abd’’ (one who worships). So, whatever feelings and inclinations you have, you have to follow what I say, and if you accept these conditions, then in the name of Allah, I accept these responsibilities.’’

In a similar spirit Hazrat Ibn Khaldoun(rh) presents us with an intriguing and powerful definition of the Bay’ah in his book Muqadima writing[5],

‘’It should be known that the bay’ah is a contract to render obedience. It is as though the person who renders the oath of allegiance made a contract with his amir, to the effect that he surrenders supervision of his own affairs and those of the Muslims to him and that he will not contest his authority in any of (those affairs) and that he will obey him by (executing) all the duties with which he might be charged, whether agreeable or disagreeable.’’ 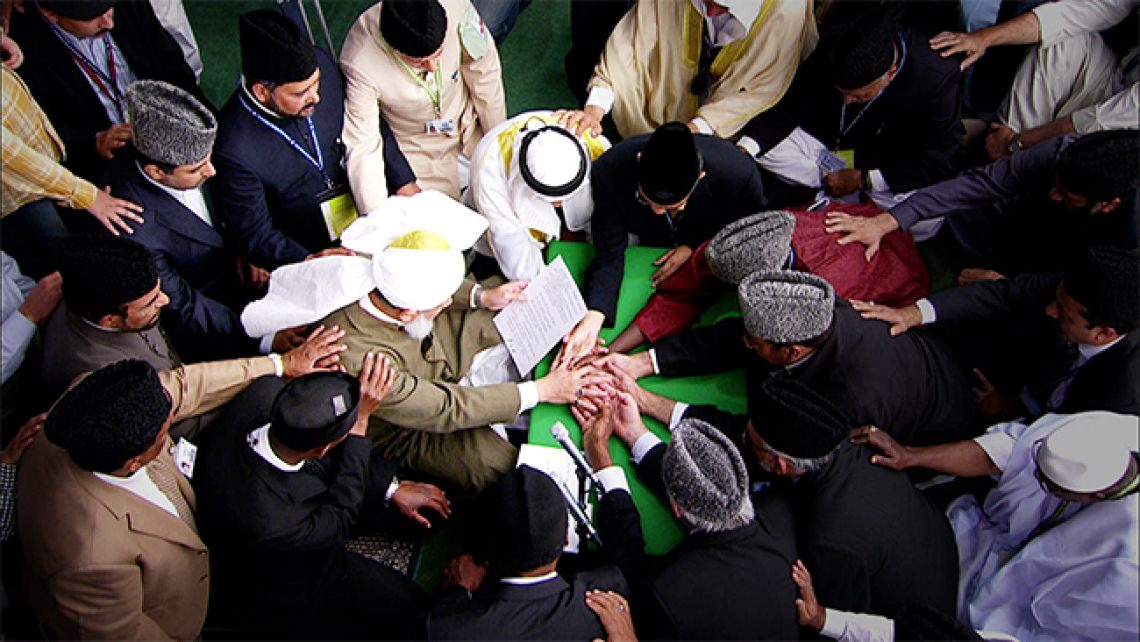 The pledge is thus a symbol of obedience whereby a believer swears allegiance to the Khalifah in fulfillment of the obligations placed upon him in the Qur’an[6] and Ahadith[7]. It is therefore with the backing of the Holy Qur’an and blessed Ahadith that Hazrat Ibn Khaldun(rh) admonishes the believers in the following statement[8],

‘’The obligation to recognize and obey the Caliph is a ‘legal obligation’ and not rational necessity.”

Commenting on the importance of the Bay’ah Imam al-Ghazali(rh) adds that as well as offering total allegiance to the Khalifah, the individual enters into a covenant with God that should not be broken. He also highlights that the Bay’ah was so important to Hazrat Muhammad(sa) that he would take the Bay’ah of new Muslims even if they were only a few in number [9]. This was highlighted in the treaty of al-Aqaba when the Holy Prophet(sa) literally traveled for days just to meet a dozen people, offer them a few words of wisdom and then take their Bay’ats.

In relation to the spiritual benefit of offering ones Bay’ah, Imam Al-Ghazali(rh) describes how reflection upon one’s pledge ultimately, through and honest conscience, leads to the realisation of one’s greater responsibilities to the family and society[10]. The Bay’ah therefore should not be taken lightly and will have been completely misunderstood if looked upon as a ritualistic or ceremonial custom. The Bay’ah is an attestation of intention and only comes into full force when our promises are matched by an equal measure of action/deeds. Illustrating the need for action and not mere words Hazrat Khalifatul Masih II(rh) writes in his Tafsir al-Kabir[11],

‘’…Khilafah is a great Divine blessing. Without it there can be no solidarity, cohesion and unity among Muslims and therefore they can make no real progress without it. If Muslims do not show proper appreciation of Khilafat by giving un-stinted support and obedience to their Khalifas they will forfeit this Divine boon and in addition will draw the displeasure of God upon themselves’’

Expansion of the Muslim dominion during Khilafat-e-Rashida
The binding of hearts – Love between Ahmadis and the Khalifa
The Divine guidance about leadership in the latter days
Philosophy of the System of Khilafat
Temporal and Spiritual Authority of the Institution of Khilafat
Go to Top
Start Here
Research
Contact Us
Follow Us
Copyright © 2022 Ahmadiyya Muslim Community. All rights reserved.
Privacy Policy | Use of Cookies | Terms of Service | Sitemap
Start Here