Righteousness – The True Essence of Sacrifice

After reciting Tashahhud, Ta‘awwuz and Surah al-Fatihah, His Holiness, Hazrat Mirza Masroor Ahmad(aba) recited the following from the Holy Qur’an:

‘Their flesh reaches not Allah, nor does their blood, but it is your righteousness that reaches Him. Thus has He subjected them to you, that you may glorify Allah for His guiding you. And give glad tidings to those who do good.’ (The Holy Qur’an, 22:38)

What is the Purpose of Sacrificing Animals?

His Holiness(aba) said that today is the Eid of sacrifice, or Eid al-Adha, on which day Muslims around the world sacrifice animals. Hundreds of thousands of animals are sacrificed on the occasion of Hajj as well. With so much meat, it is said that it is distributed among the poor, however, there are also reports that at times, this meat goes to waste as well.

His Holiness(aba) said that there are those who attempt to get a bigger animal than other people around them, in order to show that they have done some great sacrifice, and they are proud of this. In fact, in Pakistan, they are proud of the fact that they hinder Ahmadis from sacrificing animals of this day because they regard Ahmadis as non-Muslims. It is astonishing that those who are meant to uphold justice come under the influence of the clerics and so-called Muslims, and thus stop Muslims from carrying out sacrifices, or at best, tell them to do so in secrecy.

His Holiness(aba) said that doing so has no bearing in the teachings of Islam. In any case, Ahmadis are used to such opposition and their ways of disrupting them in one way or another. The underlying reason behind their actions is that they do not act with righteousness. In the end, only God can judge a person’s level of righteousness. Hence, our primary job is to prostrate before God Almighty, and if we are treading the path of righteousness, then God will surely help us.

His Holiness(aba) said that in the verse he recited in the beginning, God has stated that the physical sacrifices do not reach Him, rather it is the spirit of righteousness that reaches Him. Hence, we should not be bothered by being stopped from carrying out the sacrifice. If we had intended to do so and our intention was made with righteousness, then we need not worry for this will be accepted in the sight of God.

His Holiness(aba) said that we are fortunate to have accepted the Messiah of the age, who taught us the reality of righteousness through the teachings of the Holy Qur’an and the Holy Prophet(sa). We should not become sad if we have been hindered from carrying out the sacrifice, for if our intention was pure then it will be accepted. We find from the time of the Holy Prophet(sa) that a person who had not been able to physically go for Hajj, but had made the intention and acted with righteousness, his Hajj was still accepted.

The Meaning of Righteousness

His Holiness(aba) said that the Holy Qur’an has mentioned righteousness numerous times. In light of this, the Promised Messiah(as) has expounded upon the subject of righteousness and what is expected of his Community in this regard, from various angles.

His Holiness(aba) quoted the Promised Messiah(as) who said that if God only requires righteousness and the physical does not reach him, then what is the need for physical sacrifice? The Promised Messiah(as) said that those who do not use their physical capacities, then the spirit is not impacted, for there is a connection between the physical and spiritual. Thus, physical actions have an impact on the spirit. In the same token, if a physical action is carried out without any spirit behind it, then that is dangerous and amounts to nothing. Thus, the physical actions are there in order to impact the soul and bring about a similar state within.

His Holiness(aba) quoted the Promised Messiah(as) who said that if one falls ill, he cannot be cured until undergoing some sort of treatment. Similarly, treachery and evil deeds bring about an illness within the heart, which can be cured only through the establishment of righteousness.

His Holiness(aba) quoted the Promised Messiah(as) who said that when God sees that there is a community which makes great claims but does not act upon them, then His wrath comes down on them. Although they had been promised great victories, there were times in battles where the Muslims were made to suffer defeats as well, on account of their claims of righteousness not being backed by action. His Holiness(aba) said that thus, having accepted the Promised Messiah(as) and made the pledge of giving precedence to the faith over worldly affairs, we must take a look within ourselves and see whether we are truly implementing this and fulfilling our oath.

His Holiness(aba) quoted the Promised Messiah(as) who said that it was righteousness which enabled Abraham(as), father of the prophets, to be prepared to sacrifice his son. It was righteousness which enabled the Holy Prophet(sa), despite facing the harshest circumstances and treatment, to remain steadfast in the highest of moral conduct, which then resulted in God saying that He sends blessings and salutations upon him. It was the same spirit which enabled the Holy Prophet(sa) to take people who were nothing short of wild, and turn them into men of God.

Our Means to Victory

His Holiness(aba) said on this Eid, we must pledge to bring ourselves to these standards of righteousness outlined by the Promised Messiah(as). If we do so, then God Almighty will grant us that which He has promised to the righteous, and the opposition of our opponents will not deter us in the slightest. His Holiness(aba) prayed that may we all be able to understand and implement the true essence of righteousness.

His Holiness(aba) said that he would lead the silent prayer. In the prayer, everyone should remember those who are facing imprisonment in the way of Allah, those who are facing various hardships on account of their faith and being Ahmadi, pray for all those facing injustice, pray for humanity that they may recognise God, pray for the world to be saved from the destruction which it is leading itself to. His Holiness(aba) prayed that may Allah Almighty make this Eid extremely blessed for all Ahmadis. 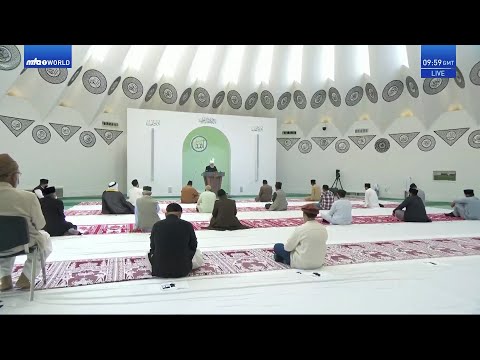 What to learn from Eid-ul-Adha
Love for Allah and Humankind - the True and Everlasting Eid & Special Prayers for Palestine and the World
Guidance Regarding Pandemic & Situation in America and the World
Special Message by Worldwide Head of the Ahmadiyya Muslim Community
Honesty, Dedication and Righteousness – Role of an Office Bearer
Go to Top
Start Here
Research
Contact Us
Follow Us
Copyright © 2021 Ahmadiyya Muslim Community. All rights reserved.
Privacy Policy | Use of Cookies | Terms of Service | Sitemap
Start Here