What to learn from Eid-ul-Adha

After Tashahud, Ta‘awuz and the recitation of Surah al-Fatihah, Hazrat Amirul Momineen(aa) recited verse 38 of Surah al-Hajj (chapter 22 of the Holy Quran), the translation of which is:

“Their flesh reaches not Allah, nor does their blood, but it is your righteousness that reaches Him. Thus has He subjected them to you, that you may glorify Allah for His guiding you. And give glad tidings to those who do good.”

Hazrat Khalifatul Masih(aa) then said that we had gathered to celebrate Eid-ul-Adha, or the Eid of sacrifice. Not only in Mecca, but all over the world, Muslims would be sacrificing animals. However, Allah has explained that although this is a part of Eid and it is a righteous deed, if the essence of sacrifice is not borne in mind during this practice, then these sacrifices are worthless. God is not desirous of the blood of animals, nor is He in need of this sacrifice. If anyone is bereft of Taqwa [righteousness], even if hundreds of thousands of animals are sacrificed, God’s pleasure cannot be won.

Huzoor(aa) explained that if this Eid of sacrifice does not draw our attention towards our responsibilities and obligations, then it is no more than a festival and is not a means of attaining the higher ranks of Taqwa. This Eid should take us to our actual purpose and we should not just be happy in consuming meat and feeding it to others.

We can only benefit from this day if we are ready to present our necks before God, worship Him as is required, become grateful servants of our Lord for turning us towards Islam and Ahmadiyyat and for becoming such servants who are ready to sacrifice our life, wealth, time and honour for the sake of the Jama’at [Ahmadiyya Muslim Community].

We should pledge to seek Allah’s pleasure in fulfilling the rights of our Bai‘at. Once we attain these objectives, only then can Allah count us among His loved ones.

Huzoor(aa) narrated a quote of the Promised Messiah, Hazrat Mirza Ghulam Ahmad(as), in which he said that Namaz [Salat] and roza [fasts], if observed without sincerity, are completely worthless.

Yogis and Sannyasis also have many spiritual exercises and due to the extent of their exercises, their hands become sore due to constant use. However, the Promised Messiah(as) explained that these exercises and struggles were such that could not bring nur (spiritual light) to them. Yes, it may appear to be a physical struggle in the way of their faith, but in fact, as it is an extreme physical exercise, it takes away from the soul and becomes an entirely physical ritual. That is why in the Quran, Allah states:

“Their flesh reaches not Allah, nor does their blood, but it is your righteousness that reaches Him.”

The answer is that if there is nothing occurring physically, then the spirit cannot be improved. The various movements in Salat impel various levels in our spirituality. If we practice rituals without knowing what purpose they are serving, then it is futile.

When humility is practiced physically, the spirit also humbles. With the various actions in Salat, our soul is taught true humility before Allah. The hallmark of a true believer is to follow the commands of Allah, and to do so, be able to sacrifice their body and soul in His way and excel in Taqwa.

Referring to attaining Taqwa and excelling in spirituality, the Promised Messiah(as) said that we should love Him as if we have died in His way. Just as we slaughter animals, we should consider ourselves slaughtered in the way of Allah. When anyone’s Taqwa is less than this, then it is not a sufficient level of Taqwa.

Prophet Abraham(as), Prophet Ishmael(as) and Hazrat Hajira(as) (Hagar) attained this rank and made huge sacrifices in the way of Allah. In their remembrance, today, Muslims commemorate the noble examples of sacrifice in an attempt to attain those levels of sacrifice.

This family did not permit any believer of any age group or of any gender to make excuses that they should be exempted. Young and old, man and woman, all presented the highest standards of sacrifice and this is an example for us all.

Hazrat Hajira’s(as) response to Prophet Abraham(as) was that if God had instructed him to leave his family in the desert, then he should not fret over leaving them and should follow the command verbatim. Thus, sacrifices made in the way of Allah are never wasted, something which this family witnessed, and something that many would later witness.

This noble sacrifice was such that it remains to this day an example for us all. Not only this, but in this line, a noble prophet would appear who would revive the highest examples of sacrifice and sincerity – Prophet Muhammad, peace and blessings of Allah be upon him.

Huzoor(aa) said that the narration of Badri Companions(ra) he is giving sermons on nowadays shows that not only men, but women and children presented the most noble sacrifices in the way of Islam. In this age, in the Bai‘at of the Promised Messiah(as), we should assess whether we have attained the same levels of piety, or if not the same, then at least close to their examples.

By the grace of God, there is a group from among us who follow Allah’s commands to the letter and sincerely tries to improve their moral and spiritual conditions.

However, there is another group, unfortunately, that has been engulfed in worldly pursuits and materialistic gains. They lack the true essence of Taqwa.

Regarding the ranks that we should endeavour to attain, the Promised Messiah(as) once said that we should ponder over the finest ways of attaining Allah’s pleasure.

Huzoor(aa) further explained that if we do not try to improve ourselves and better even the smallest of sins, they gradually take us away from Allah. For example, if we miss even one Namaz, it gradually draws us away from higher ranks of spirituality.

At another place, the Promised Messiah(as) says that the Quran has explicitly mentioned the dos and don’ts. God Almighty does not desire for disorder to spread in the earth, rather He desires for unity to lead in the world. Whoever has an iota of enmity or spite for their brethren does not allow for this to happen. Only one who is an enemy of unity can have hatred for his fellow beings or wish to cause them hurt. 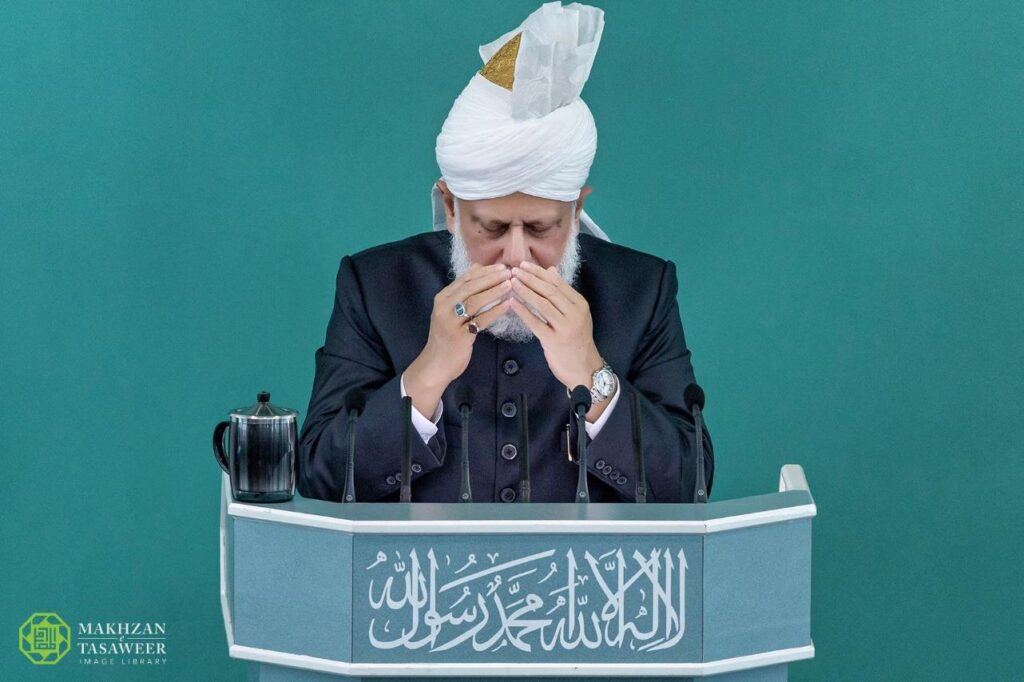 Huzoor(aa) prayed towards the end that Allah may enable us to tread along the paths of Taqwa, that this day of sacrifice draws us towards the true meanings of sacrifice and we are able to cleanse our soul, attain Allah’s pleasure and become of those who Allah has given glad tidings to.

We should also pray for the early and pioneering missionaries who were sent to Western and worldly countries for their lofty statuses. We should also pray that their progenies always remember their forefathers’ noble examples and try to live up to their examples. Those who offer their time and services for the Jama’at and its propagation should also be remembered in prayers; may Allah accept their sacrifices. Asiran-e-rah-e-Maula should also be prayed for that Allah swiftly removes all difficulties from their way.

Huzoor(aa) then prayed that Allah may also have mercy upon us all and cover our flaws and shortcomings. May each and everyone of us increase in our level of faith. May we witness the victories of Islam more than ever before so that we may witness the true Eid.

Towards the end, Huzoor(aa) said:

“Offer these prayers profusely, increase your levels of faith and always bear in mind the rights of your fellow brothers. This is the lesson that Eid-ul-Adha gives us. May Allah enable us to act upon it.”

After Khutba-e-Thaniya, Huzoor(aa) led everyone in dua, after which he extended a hearty “Eid Mubarak” to all those present and those celebrating Eid around the world. 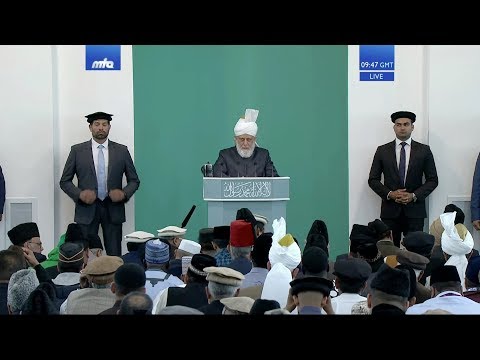 Righteousness – The True Essence of Sacrifice
100 Years of the Majlis-e-Shura – Understanding its Real Purpose
Islam’s Principles for Establishing True Peace
Humanity First – Wiping Away the Tears of the Distressed
Safeguarding Yourself From the Toxic Glamour of the World
Go to Top
Start Here
Research
Contact Us
Follow Us
Copyright © 2023 Ahmadiyya Muslim Community. All rights reserved.
Privacy Policy | Use of Cookies | Terms of Service | Sitemap
Start Here