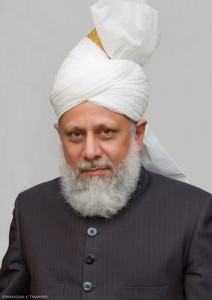 His Holiness, Mirza Masroor Ahmad, Khalifatul-Masih V (aba), is the supreme head of the worldwide Ahmadiyya Muslim Community. He is the Fifth Khalifah of the Promised Messiah and Reformer, Hazrat Mirza Ghulam Ahmad (as) of Qadian.

His Holiness was born on September 15, 1950 in Rabwah, Pakistan to the late Mirza Mansoor Ahmad and the late Nasirah Begum Ahmad. Upon completing his Masters Degree in Agricultural Economics in 1977 from the Agriculture University in Faisalabad, Pakistan, he formally dedicated his life to the service of Islam. He was sent to Ghana in 1977 where, for several years, he served as a principal of various Ahmadiyya Muslim schools.

Later, when His Holiness returned to Pakistan, he served in various capacities at the Headquarters of the Ahmadiyya Muslim Community in Rabwah.

Elected to the lifelong position of Khalifah (Caliph) of the Ahmadiyya Muslim Community on 22nd April 2003, His Holiness serves as the worldwide spiritual and administrative head of an international religious organization with tens of millions of members spread across more than 200 countries.

Since being elected Khalifah, His Holiness has led a worldwide campaign to convey the peaceful message of Islam, through all forms of print and digital media. Under his leadership, national branches of the Ahmadiyya Muslim Community have launched campaigns that reflect the true and peaceful teachings of Islam. Ahmadi Muslims the world over are engaged in grassroots efforts to distribute millions of ‘peace’ leaflets to Muslims and non-Muslims alike, host interfaith and peace symposia and organize exhibitions of the Holy Qur’an to present its true and noble message. These campaigns have received worldwide media coverage and demonstrate that Islam champions peace, loyalty to one’s country of residence and service to humanity.

In 2004, His Holiness launched the annual National Peace Symposium in which guests from all walks of life come together to exchange ideas on the promotion of peace and harmony. Each year, the symposium attracts many serving ministers, parliamentarians, politicians, religious leaders and other dignitaries.

His Holiness has travelled globally to promote and facilitate service to humanity. Under the leadership of His Holiness, the Ahmadiyya Muslim Community has built a number of schools and hospitals that provide excellent education and healthcare in remote parts of the world.

His Holiness strives to establish peace at every level of society. He constantly advises members of the Ahmadiyya Muslim Community to carry out a ‘jihad’ (or struggle) of the self to strive to reform individually, which is the true and biggest form of ‘jihad,’ so that every Ahmadi Muslim can first establish peace on an individual level, and then be enabled to also help others find peace.

At an individual and collective level, on local, national and international platforms, His Holiness is striving to advise all others of the practical means of establishing peace, based on the true teachings of Islam.

His Holiness, Mirza Masroor Ahmad (aba) currently resides in London, England. As spiritual leader of Ahmadi Muslims all over the world, he vigorously champions the cause of Islam through a refreshing message of peace and compassion.

A Message for Our Time