All the counsel I have written is intended to increase my community in the fear of God Almighty; and so that they become worthy of being saved from His wrath, which is currently ablaze on earth; and so that they may be saved from the plague, which is prevalent in these days. It is true piety which pleases God (Alas! How rare is true piety). God safeguards a truly righteous person from affliction in no ordinary way but in the manner of a sign.

Many deceitful and ignorant persons claim to be pious, but truly pious are those whose virtue is established by a sign from God. Anyone can claim to love God, but only those love Him, whose devotion is testified to by heaven. Everyone claims that their religion is true, but only the religion of such a one is true who is bestowed heavenly light in this very life. Everyone claims that they will attain salvation, but only such a person is true in their word who sees the heavenly light of salvation in this very world. Strive therefore, to become the beloved of God so that you may be saved from every affliction. A truly righteous person will be protected from the plague for they have found sanctuary with God. So become truly righteous. You know well what God has said regarding the plague. It is the fire of divine wrath. Save yourself from this fire. A person who sincerely follows me and is not unfaithful, indolent, unmindful, and torn between virtue and sin shall be saved. But others who tread indolently on this path and do not wholeheartedly advance in piety, or who prostrate before the world, put themselves to trial.

Show complete obedience to God in all respects. The time has now come for all those who consider themselves members of my community to sacrifice their wealth for the sake of this community as well. A person who can afford even a penny ought to donate that penny towards the expenditure of the community on a monthly basis. Those who can afford to give a rupee per month should donate a rupee every month. The costs of hospitality aside, religious projects also require substantial funds. Hundreds of guests come to visit, but comfortable guesthouses have not been built until now due to a lack of funds, though this is necessary. Sufficient bedding is not available either. The mosque requires an extension. Our print and publishing efforts lag behind our opponents. For every fifty thousand magazines and religious journals published by the Christians each month, we are barely able to consistently produce a thousand. Thus, every member of the community ought to aid such projects according to their means, so that God Almighty extends to them His help as well. It is better to consistently contribute every month even if only a small amount, than to donate after long intervals according to one’s whim. Every person’s sincerity is determined by their service. Dear ones! The time has come to serve religion and assist its cause. Prize this opportunity—it shall not come again. Those upon whom Zakat is liable should send their contributions here. You should all guard yourselves against frivolities and spend your wealth in this cause. Be loyal in all circumstances so that you may be blessed with favour and the Holy Spirit, for this reward has been prepared for those who have entered this community. The greatest manifestation of the Holy Spirit was shown to our Prophet, peace and blessings of Allah be upon him. At times, the Holy Spirit appeared to certain Prophets in the form of a dove, or in the form of a cow to other Prophets and avatars, or in various other semblances to others. The Holy Spirit did not manifest itself in the guise of a human being until the advent of the perfect man, that is to say, our Prophet, peace and blessings of Allah be upon him. When, however, the Holy Prophet, peace and blessings of Allah be upon him, appeared, since he was the perfect man, the Holy Spirit also manifested itself upon him in the form of a human being. As this powerful manifestation of the Holy Spirit encompassed the entire breadth of heaven and earth, for this reason, the teaching of the Holy Quran remained safeguarded against polytheism. Conversely, the Holy Spirit manifested itself to the founder of Christianity in an exceedingly frail form, that is, a dove; therefore, the unholy spirit, namely Satan, attained ascendancy over the religion. He exhibited his power and might in the likeness of an enormous serpent and assailed Christianity. This is the reason that the Holy Quran has referred to the misguidance of Christianity as being the most terrible on earth. It states that the deification of a human as God and to attribute a son to God is such a grave sin on earth that it could well rend heaven and earth asunder and shatter it into pieces. So, Christianity has been mentioned and refuted in the very beginning of the Quran as is understood from the verse,1

, and then again at its close as is evident from the following:

The middle part of the Quran also mentions the evil of the Christian faith as is apparent from the verse:

Thus, according to the Quran, since the creation of the world, creature worship and falsehood have never been so rampant as in this age. This is why the Christians alone were called for a prayer-duel and no other polytheists. It is not difficult to understand why the Holy Spirit appeared in earlier times in the guise of birds and other animals. I do point out, however, that this was an indication of the fact that the nature of our Prophet(sa) was so excellent that he, as it were, compelled the Holy Spirit to appear before him in the form of a human being. Why do you lose heart when you follow such a magnificent Prophet? Display such conduct that even the angels in heaven are left astonished at your loyalty and purity, and invoke blessings upon you. Submit to death so that you might be granted life. Cleanse your inner selves of selfish passions so that God may settle in you. Completely sever your earthly ties on the one hand, and establish a perfect heavenly relationship on the other. May God help you.

I now conclude and pray that my teachings prove beneficial for you. May such a transformation take place within you that you become the stars of the earth, and that the earth is illumined by the light you have been granted by your Lord. Ameen, and again, Ameen. 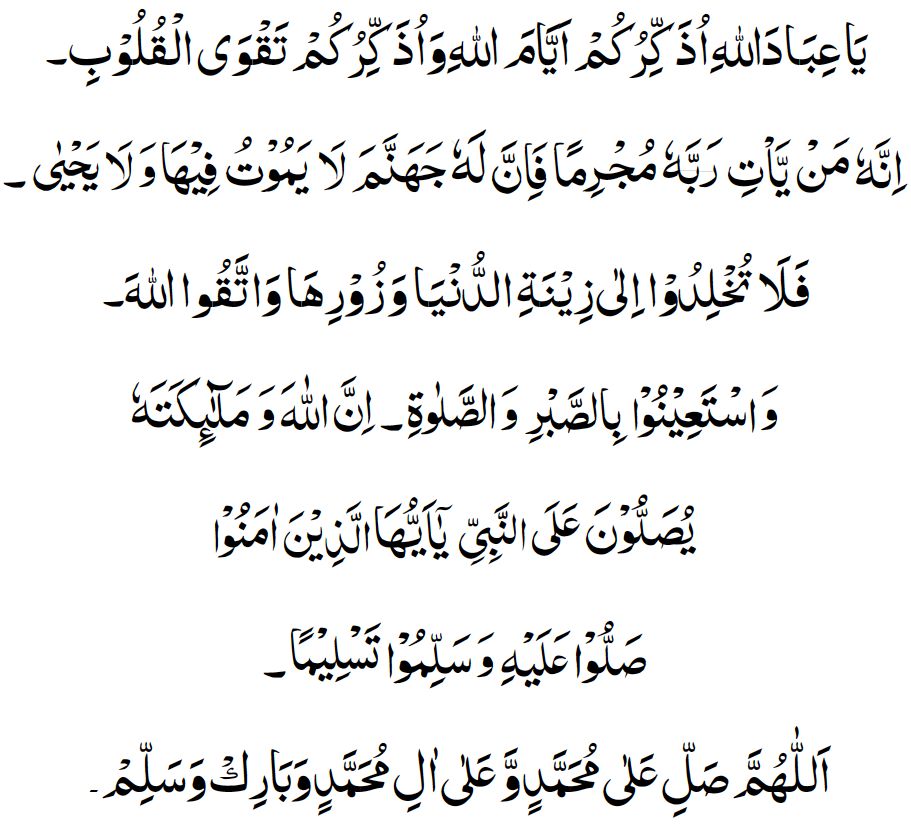 2 And those who have not gone astray (Surah Al-Fatihah, 1:7) [Publisher]

5 O Servants of Allah! I remind you of the coming of His days and admonish you to adopt righteousness of heart. Verily, he who comes to his Lord a sinner— for him is hell; he shall neither die therein nor live. (Surah Taha, 20:75) [Publisher]

Do not be ensnared by the beauty and adornment of this world. And seek help with patience and Prayer; (Surah Al-Baqarah, 2:46) [Publisher]

Allah and His angels send blessings on the Prophet. O ye who believe! You also should invoke blessings on him and salute him with the salutation of peace. (Surah Al-Ahzab, 33:57) [Publisher]

We invoke your grace and blessings on Muhammad and his Ummah.[Publisher]

Noah's Ark: An Invitation to Faith