On various occasions, Huzoor-e-Anwar(aba) has drawn the attention of parents of the Waqfeen-e-nau and Waqifat-e-nau towards the important obligation of training their children due to the honor that has been bestowed on them of offering their children in the way of Allah the Exalted. Parents of Waqfeen-e-nau should always remember that Jama’at has entrusted these children to them. Our objective should be to train them from a young age so they can become useful members of the Jama’at and the society. In this regard, Huzoor-e-Anwar has given valuable advice in his sermons, addresses and special classes with Waqfeen-e-nau. In a Friday sermon he said: 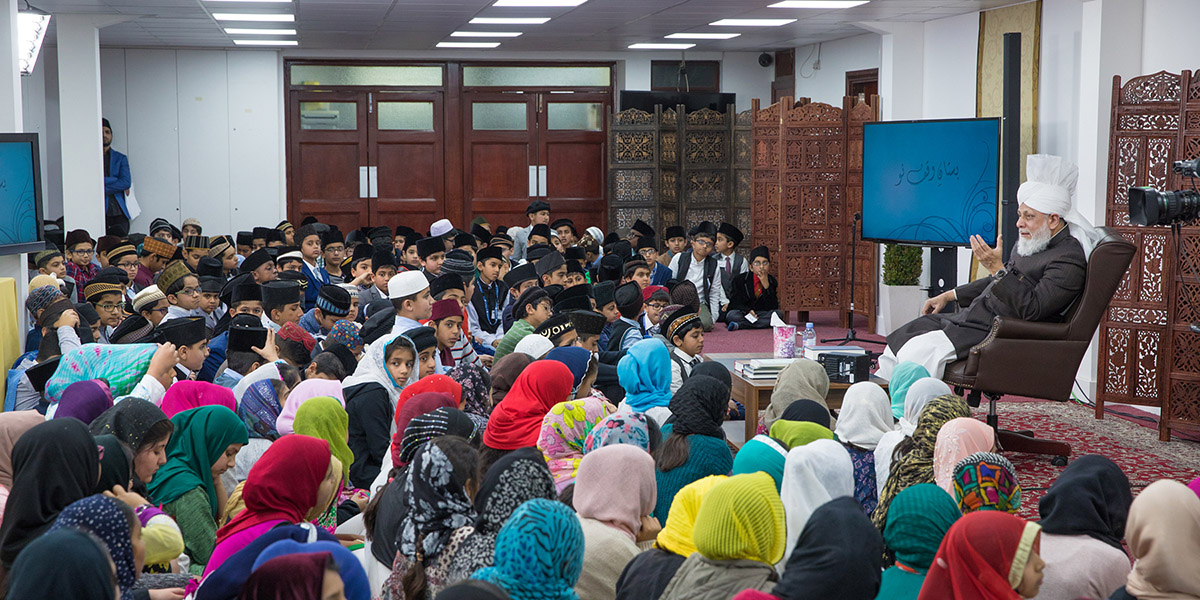 “In another instance, His Holiness the Promised Messiah(as) has referred to Prophet Abraham(as) to further expound on faithfulness, having done so in the following manner by saying, “The path to earning nearness to God Almighty demands the display of steadfastness.” Stick to truthfulness, and ensure your faithfulness is sincere, “The nearness [to God] Prophet Abraham(as) acquired was due to this. Accordingly, Allah says:

‘And of Abraham who fulfilled the commandments?’ [Holy Quran 53:38].

That, ‘He was that Abraham who displayed faithfulness.’ Demonstrating faithfulness, steadfastness, and sincerity to God demands a kind of death. Unless a person is prepared to extinguish his attachment to the world and all its pleasures and attractions and endure every humiliation and hardship for God, this quality cannot be developed. Idolatry is not merely that a person worships a tree or stone, rather every single thing, which prevents one from earning nearness to God and is preferred over Him is an idol; and man harbors these idols within himself to the extent that he is not even aware that he is worshipping idols.” Frequently today, dramas [TV programs] have become idols, as has the Internet and pursuits of this world. In other instances, desires [have become idols]. Then, [the Promised Messiah(as)] states that a person is not even aware that he is worshipping idols while he is doing so within the depths of his being. Thus, [the Promised Messiah(as)] states, “Therefore, unless one sincerely becomes God’s and is prepared to endure every hardship in His Way, the manifestation of steadfastness and sincerity is difficult.” He continues, “Did Abraham(as) easily acquire this title from God? No. His announcement declaring:

‘And of Abraham who fulfilled the commandments?’ [Holy Quran 53:38].

and came when he was ready to sacrifice his son. Allah desires actions and actions alone please Him and actions arise from pain.” ‘Actions arise from pain,’ i.e., sacrifice is necessary for one’s acts to be pious and earn Allah’s pleasure. One has to expose oneself voluntarily to pain and sadness. But that person is not permanently in pain. Of course, pain is intertwined with such actions, but that person is not forever afflicted with pain. [The Promised Messiah(as)] states, “But when a person is prepared to endure pain for God’s sake then God does not expose him to such pain…when Abraham(as) made all the preparations to sacrifice his son to fulfill God’s commandment, then Allah the Almighty saved his son.” The son’s life was saved, and the father was saved from the pain that would have been experienced as a result of the sacrifice. [The Promised Messiah(as)] states, “He [Prophet Abraham(as)] was thrown into the fire, but the fire could not harm him in any manner.” [The Promised Messiah(as)] states that if a person, “is prepared to endure pain for God’s sake, God Almighty saves him from that pain.”{Malfuzat, vol. 4, pg. 429-430, ed. 1985, England}”.

“Briefly, I wish to draw attention to some Waqfeen administrative issues and procedures. Some people have raised the issue that some Waqfeen-e-Nau have a misconception in their minds that, upon becoming a member of Waqf-e-Nau, they have acquired a separate identity. They do have a distinct identity, but this does not afford them any extraordinary treatment. Rather, along with this identity, they will be expected to increase their level of sacrifice. Some people plant the idea in Waqfeen-e-Nau children that they are very special children, resulting in them feeling they are special when they become adults. And here as well, I have been made aware of instances where such individuals ignore the reality of waqf while making the purpose of their life to have the mere title of Waqf-e-Nau, believing it to make them special.”

Immoral actions are not only sins and make one go astray but they also lead to bad effects on human nature. In this regard, Huzoor-e-Anwar gave some important instructions to Waqfeen-e-nau:

“Another sign of a believer is that he stays away from indecent and immoral things. During youth, there is a risk, particularly when living in this Western society that a person can be exposed to indecency and be led astray. For example, immoral and indecent programs are routinely shown on the TV and on the Internet. These are obscene and sinful things that a believer must stay far away from. Certainly, a Waqf-e-Nau who has renewed the pledge made by his parents prior to his birth to spend his entire life serving his faith must always stay away from such immoral activities. Allah the Almighty has said such things take people away from their faith and so true believers must save themselves from such indecency and all forms of wrongdoing.” 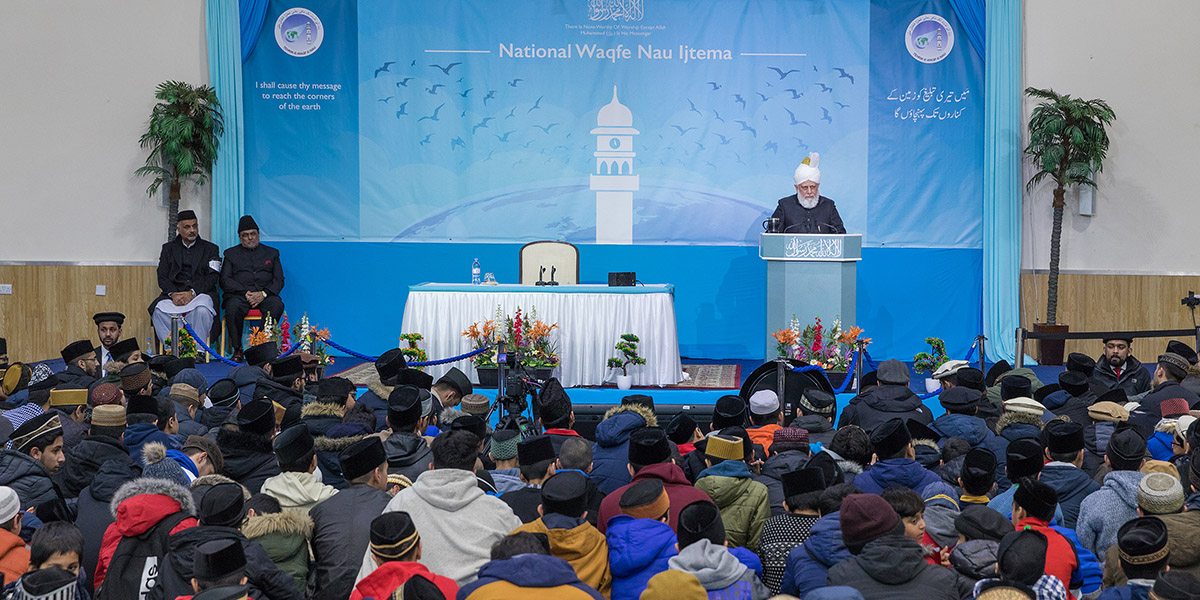 Media is expanding internationally; hence, Ahmadis should pay special attention to gaining expertise in this field. Huzoor-e-Anwar(aba) has repeatedly drawn attention of the Waqfeen-e-nau and Waqifat-e-nau on playing an important role in the field of media, preparing experts in media for future needs of Jama’at in this field. On one occasion, he said:

“We also require people with media and communication related degrees and training. The work of MTA continues to expand and we have also started our radio service, Voice of Islam, recently. The radio is currently in its formative stage, but we wish to constantly develop it and increase its scope and we will require suitable manpower. Thereafter apart from MTA International, other local MTA studios are either being opened or are currently being developed in a number of countries. Thus, those of you who have a talent and interest in these fields, should pursue broadcasting, media and other similar technical fields. We also require journalists and media professionals, because the impact of the mass media is ever-increasing. And so, we need our people who can present the true teachings of Islam to the world through the media. Therefore, as Waqfeen-e-Nau, you should keep in mind what the requirements and needs of our Jama’at are, and based on those requirements, you should educate yourselves and work as hard as you can. Once you have completed your respective degrees or training, you should make sure you inform the Jama’at and submit yourselves as Waqf-e-Zindagi (a life devotee) and be ready to serve.” 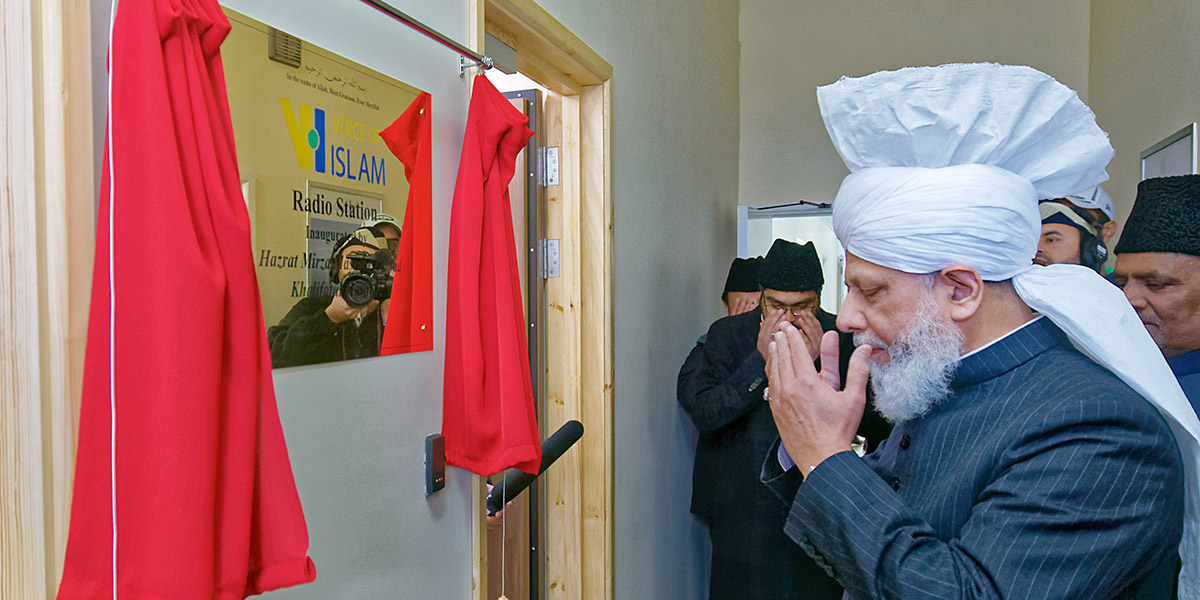 One day before giving the preceding address on this important topic, Huzoor-e-Anwar(aba) addressed the Annual Ijtema of the Waqifat-e-Nau and said:

“I wish to say that within our Jama’at there is a particularly strong need for Ahmadi women doctors and teachers. Also, we require media graduates who can work in MTA or in any other way. And we also need Ahmadi journalists. Thus, those of you who have interests in these fields should try to pursue such avenues and paths.”

Words of the Khalifa of the time guarantee the establishment of a spiritual life and a source of reformation and training of future generations. Drawing the attention especially of the Waqfeen and Waqifat-e-nau towards listening to the Friday sermons, Huzoor-e-Anwar(aba) said: 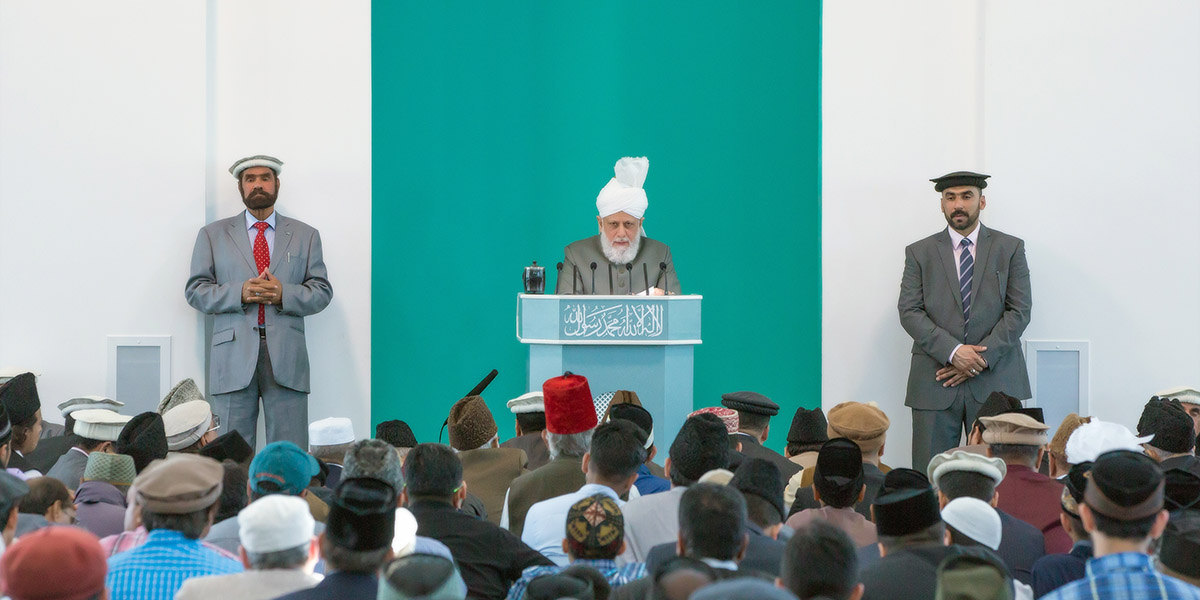 “At the very least, they are to listen regularly to my sermons on MTA. And this instruction is not only important for the parents of Waqfeen-e-Nau but for every Ahmadi Muslim who wishes their progeny to stay attached to Nizam-e-Jama’at. They should make their homes Ahmadi Muslim homes, not worldly-minded homes. Otherwise, future generations will, having been absorbed in the material world, not only become distant from Ahmadiyyat but from God Almighty and this will destroy their life in this world and the next.

May God make it so that not only Waqfeen-e-Nau children earn God Almighty’s nearness and act according to the dictates of taqwa [righteousness], but also that the conduct of their relatives be such that it saves them from every kind of disgrace. In fact, let it be that every Ahmadi Muslim become a true Ahmadi Muslim regarding whom the Promised Messiah(as) has repeatedly given instructions so that the raising of the flag of Ahmadiyyat and true Islam can rapidly be seen.”