Fulfilling the Rights of Others

After reciting Tashahhud, Ta‘awwuz and Surah al-Fatihah, His Holiness, Hazrat Mirza Masroor Ahmad(aba) said that he would continue on from his speech delivered at the Jalsa Salana UK 2019, regarding the various rights which must be fulfilled, in light of the Holy Qur’an, and traditions of the Holy Prophet(sa). His Holiness(aba) said that it is in acting upon these teachings, that the rights of others can be honoured and fulfilled. By not acting upon these teachings, the problems of the world cannot be solved, nor can the rights of various parts of society be fulfilled.

His Holiness(aba) said that we have no need to adhere to the standards of rights which are set by worldly people, nor do we need to be defensive about our teachings. Rather, we should propagate our teachings of honouring the rights of others, so that true peace and harmony can come about in society. It is true, that the rights of society cannot be honoured until and unless it is accepted that there is One Creator of this universe, there is none worthy of worship except Him, and no partners should be associated with him. When this is done, and true belief in God is established, then the world can move towards establishing true peace.

His Holiness(aba) said that God has enjoined at every step to honour the rights of His creation. In fact, He has said that until we are grateful to our fellow people, we cannot be grateful to God. Thus, Islam presents beautiful teachings of fulfilling the rights of others.

His Holiness(aba) said that further to the rights he has mentioned previously, he would continue by mentioning the rights of others which are taught by Islam. In fact, Islam’s teachings are so thorough, that it establishes the rights of even animals. Not only does Islam teach these rights, but teaches how to implements and enact them as well.

The Rights of Friends

His Holiness(aba) said that Islam teaches to honour the rights of friends. One should befriend those who are pure of heart, and then honour that friendship. God Almighty states in the Holy Qur’an:

‘O ye who believe! take not others than your own people as intimate friends; they will not fail to corrupt you. They love to see you in trouble. Hatred has already shown itself through the utterances of their mouths, and what their breasts conceal is greater still. We have made clear to you Our commandments, if you will understand.’ (3:119)

His Holiness(aba) said that God Almighty has included friends in the sphere of close relatives, showing thereby the manner and care with which they should be treated.

His Holiness(aba) said that Islam teaches to honour friendship for the sake of God. Any other friendship is merely temporary, whereas a friendship for the sake of God carries a firm and strong bond, which is beyond mere friendship and can therefore be sustained. This also increases the love with which friends treat one another. The Holy Prophet(sa) said that anyone who prays for their brother when they are not present, angels pray for the same to be accepted in favour of the supplicant. Brothers here include friends as well. This is the manner in which Islam has fostered love between friends. Islam also teaches that friends should not be upset with each other and refrain from speaking with one another for more than three days. Furthermore, Islam teaches that one should also uphold the friendships of their parents, even after they have passed away, thus establishing the honour of friendships for generations.

His Holiness(aba) quoted the Promised Messiah(as) who likened his care for friends to a body which, when experiencing pain in one part, experiences pain throughout the body. The Promised Messiah(as) said that his restlessness for the wellbeing of his friends is like a mother’s restlessness for the wellbeing of her children. The Promised Messiah(as) related an incident of two friends, one of whom went on a journey. Whilst one was on a journey, the other requested the key to his safe and took some money. When the other friend returned and was informed of this, he became very happy, and due to this happiness, freed the worker who had not stopped his friend from doing so. This incident was to exhibit the close bond which friends should develop.

The Rights of the Sick

His Holiness(aba) said that Islam has enjoined fasting for Muslims, but has established rights for those who are ill. God Almighty says,

‘The prescribed fasting is for a fixed number of days, but whoso among you is sick or is on a journey shall fast the same number of other days;’ (3:168)

Thus, Islam has established the rights of those who are ill and exempted them from fasting, so long as they are ill, and until their health is restored.

His Holiness(aba) said that Islam also teaches to fulfil the desires of those who are ill. Once, the Holy Prophet(sa) was visiting someone who was ill, and that person expressed their desire for some bread. The Holy Prophet(sa) said that if a person who is ill desires something to eat, then an effort should be made to provide that for them. Islam also teaches that there is a great reward for those who visit the ill, thus advocating the rights of the ill.

His Holiness(aba) said that one of the five rights which one Muslim has over the other as stated by the Holy Prophet(sa) is to visit the ill.

His Holiness(aba) said that Islam has also established the rights of orphans. God Almighty says,

‘And come not near the property of the orphan, except in the best way, until he attains his maturity, and fulfil the covenant; for the covenant shall be questioned about.’ (17:35) 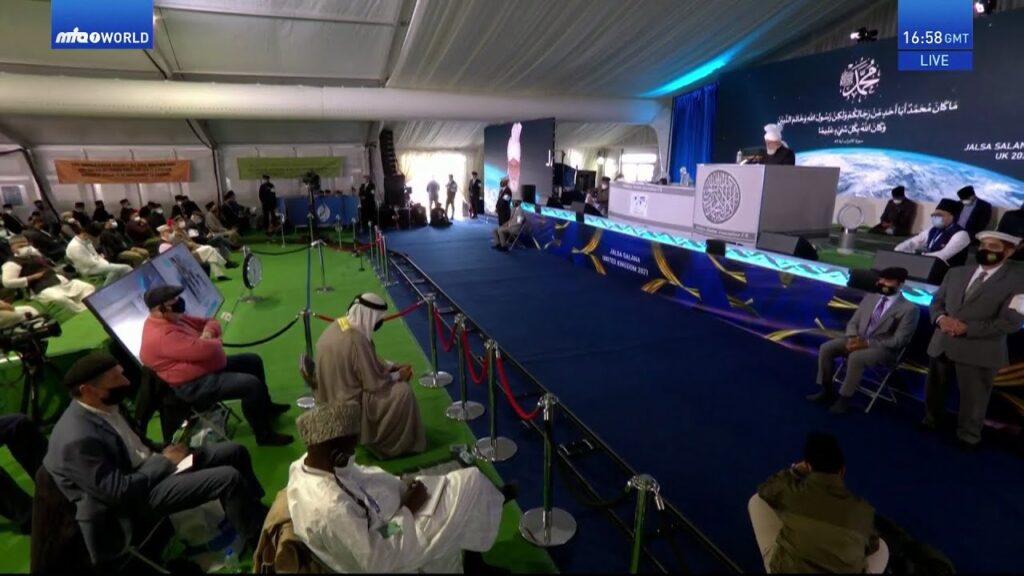 Islam says that if one is able, they should spend out of their own pocket to care for orphans, and if they are unable to do so, then they should be extremely deliberate in their spending from the wealth of orphans. Furthermore, Islam says that when an orphan reaches the age of maturity, their wealth should be given to them. It is also stated in the Holy Qur’an:

Thus, Islam warns that there is punishment for one who does not honour and respect orphans. In this way, Islam has protected what is perhaps the weakest faction of society.

His Holiness(aba) quoted the Promised Messiah(as) who said that one should take care of orphans and the needy, and do so not for their own benefit or gain, but only to attain the pleasure of Allah Almighty and attain His nearness.

His Holiness(aba) said that Islam also teaches to uphold and fulfil oaths, thereby establishing the rights of oaths. God Almighty states in the Holy Qur’an,

‘Excepting those of the idolaters with whom you have entered into a treaty and who have not subsequently failed you in any thing nor aided anyone against you. So fulfil to these the treaty you have made with them till their term. Surely, Allah loves those who are righteous’ (9:4)

Rights of Others During Wartime

His Holiness(aba) said that Islam has also established the rights of those at war. Often, those at war are merely trying to enforce their might, and though they claim to fight for rights, they are usurping the rights of others. If Islam gives permission to fight, it is only and solely for the purpose of establishing peace and religious freedom. It is stated in the Holy Qur’an,

‘Those who have been driven out from their homes unjustly only because they said, ‘Our Lord is Allah’—And if Allah did not repel some people by means of others, there would surely have been destroyed cloisters and churches and synagogues and mosques, wherein the name of Allah is oft commemorated. And Allah will surely help one who helps Him. Allah is indeed Powerful, Mighty—’ (22:41)

Islam states that if men were left free, then religion would be destroyed altogether. Islam thus enjoins justice as it is stated in the Holy Qur’an,

‘O ye who believe! be steadfast in the cause of Allah, bearing witness in equity; and let not a people’s enmity incite you to act otherwise than with justice. Be always just, that is nearer to righteousness. And fear Allah. Surely, Allah is aware of what you do.’ (5:9)

His Holiness(aba) said that whenever the Holy Prophet(sa) appointed a general or commander, he would advise them to act with righteousness, to be fair and just, to not transgress and, if the opponents lay down their arms and cooperate, to cease fighting. It is also recorded that the Holy Prophet(sa) would enjoin any envoy departing that they should strive to establish compassion, and should not level an attack until they have first invited the opposing party to peace. He would also instruct that no children, women or elderly people should be harmed.

His Holiness(aba) said that these days, people raise allegations against Islam, yet the same people carry out air-raids destroying hospitals and schools, or end up harming and killing innocent people. Yet the teachings of Islam are to foster peace and fulfill the rights of others.

His Holiness(aba) said that even at times of war, Islam has established the rights of opponents. Islam forbids Muslims from mutilating or humiliating the bodies of those opponents killed in battle. Furthermore, Muslims are instructed not to act deceitfully in battle. Women, children and elders should not be harmed. When going into another city or country for battle, the residents and citizens should not be harmed or terrorised, as is done by those who invade countries these days and carry out air-raids. The faces of opponents should not be harmed. Prisoners should be tended and cared for and given the same things to eat and wear as one eats and wears themselves. Similarly, Islam teaches not to destroy buildings, or cut down fruit-bearing trees.

His Holiness(aba) said that these days, when countries are at war, they are threatening the other with nuclear warfare; in fact in the last world war, nuclear bombs were actually used. However, when we look at the history of Islam and the examples of Companions(ra), we find that they never acted unjustly or cruelly in any way.

His Holiness(aba) said that these are only a few rights which he mentioned. If these rights are upheld, then true peace and harmony can be established in the world. However, if the world neglects the fulfilment of these rights, then the world should prepare for a global war.

His Holiness(aba) said that we must pray for the world to avoid such destruction, and that humankind may be able to recognise the One, True God. His Holiness(aba) prayed that may all Ahmadis remain safe and be saved from any and all hardships.

His Holiness(aba) then led the silent prayer.

His Holiness announced that the total attendance at the Jalsa over the three days was 8,887, of which 6,709 were men and 2,168 were women. Also, there were over 3,000 people who gathered in various mosques around the UK to watch the Jalsa Salana.

At the end, His Holiness(aba) said that people from different parts of the world could be seen taking part virtually in the Jalsa Salana, despite the varying time differences. This too is an extraordinary thing to behold. His Holiness(aba) prayed for all those who attended around the world. 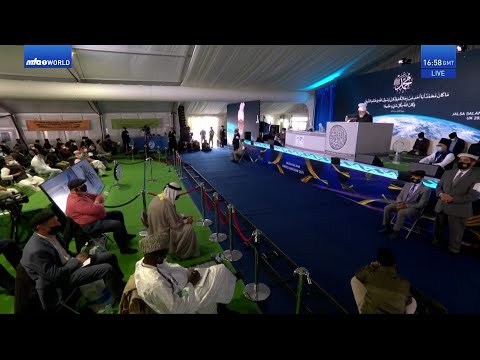