Islam and bathroom hygiene: The inextricable link between physical and spiritual purity

Cleanliness is half of faith and cleanliness is next to godliness. Without even realising, we may be committing unhygienic acts that render us undeserving of Allah’s love, for He says:

Amongst other habits, correcting our bathroom hygiene is essential in order to follow the Prophet Muhammad’s(sa) sunnah [practice] and attain Allah’s love.

Some may contend by saying, “Physical hygiene is hardly a significant issue when it comes to Allah. It has no effect on my spirituality.” How dreadfully wrong such people are.

“We must look after physical health for the spiritual progress of the soul. Without the [upright maintenance of] the body, you cannot have a spiritual life. The body is a container for the soul … If you break the container, then its contents will spill. The body and soul are associated in this very manner, and any damage to the body will affect the soul… [Thus,] We must keep our bodies, in which the soul resides, clean and tidy so that the soul is not damaged.” (“Islam and Protection of Health” in Steps to Exercise, pp. 12-13)

Clearly, these men of God are drawing an inseparable link between spirituality and physical cleanliness.

“True repentance is conditional upon true cleanliness and purity. It mandates that one eradicate all forms of filth and impurity. Otherwise, verbal repentance and mere utterance of words is meaningless.” (Al Hakam (Urdu), 17 September 1904, Vol. 8, No. 31, p. 1 and Tafsir Hazrat Masih-e-Maud(as), Vol. 1, p. 705)

Hazrat Khalifatul Masih V, may Allah be his Helper, affirms this sentiment:

“Man becomes beloved to God only when he carefully considers and cares for his physical cleanliness, alongside his spiritual purity.” (Friday Sermon, 23 April 2004)

But why? Why does there lie an inextricable link between physical cleanliness and spirituality? Why can one not exist without the other? 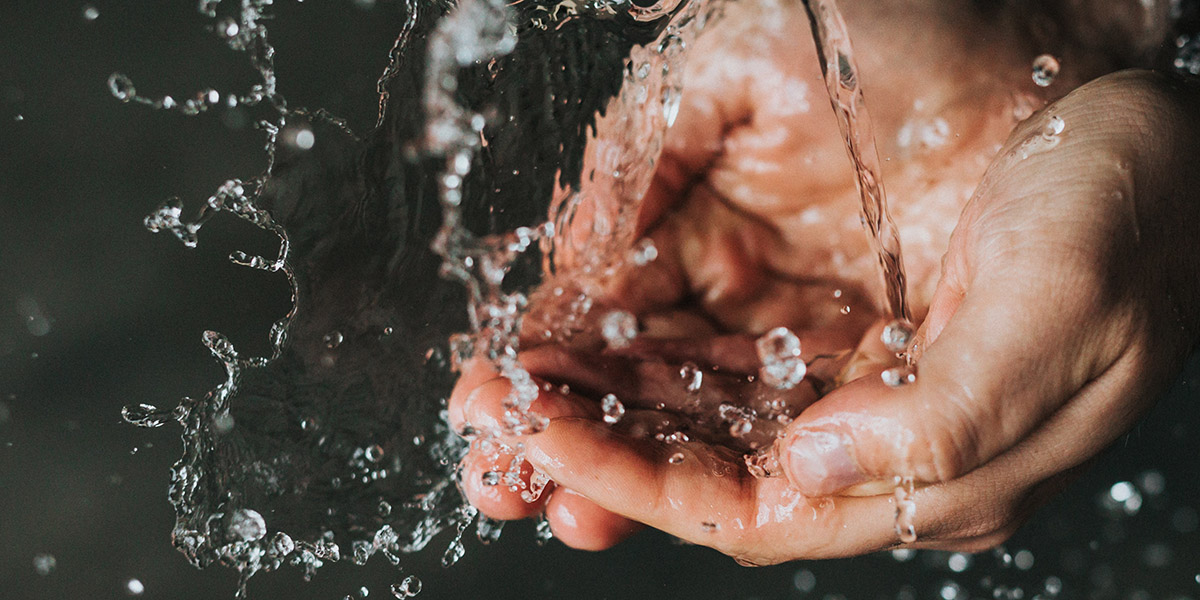 Because physical cleanliness is a basic right that we owe to humanity, to our fellow brethren; it is huquq-ul-ibad (rights owed towards God’s creation). And God loves when we care for His Creation. To remain physically clean is to afford comfort and safe living to those around us. To be physically dirty is to harm them, to contaminate them, to put them at risk for disease, infection and ailment.

How can God love us and accept our turning to Him if we are harming, distressing and afflicting His creation?

Physical cleanliness is also a basic right we owe to Allah; it is huququllah (rights owed to Allah). How can we present ourselves to Allah with filth on our bodies and clothes? Do we not gasp in disgust when we see a person or animal covered in filth? Do we not ensure that we are pristinely clean and showered, with not an iota of filth on our bodies if we were to meet Hazrat Khalifatul Masih(aa) or the head of our state? So why show such neglect with Allah?

Now that we have grasped the principle for hygiene, here is a short (and by no means a comprehensive) list of dos and don’ts in the bathroom. Neglect in bathroom hygiene is a grave issue that many disregard. So, let’s start with understanding bathroom etiquette, for it may well be our saving grace when we are called to account by Allah.

Prayer when entering the bathroom

“O Allah! I seek refuge in You from all (physically and spiritually) harmful and vicious things.” (Tirmidhi, Book on Purification)

When leaving the bathroom, the Holy Prophet(sa) taught:

“All Praise is to Allah Who has relieved me of impurity and given me good health.” (Sunan Ibn Majah, The Book of Purification and its Sunnah)

Do not stand when urinating

“The Messenger(sa) of Allah forbade us to urinate while standing.” (Sunan Ibn Majah, Book of Purification)

“The Messenger(sa) of Allah saw me urinating while standing and he said: ‘O Umar, do not urinate standing up.’ So, I never urinated whilst standing after that.” (Sunan Ibn Majah, Book of Purification)

The Messenger(sa) of Allah said:

“Most of the torment of the grave is because of urine.” (Sunan Ibn Majah, Book of Purification)

“Beware of (smearing yourselves with) urine because it is the main cause of punishment in the grave”. (Bulugh al-Maram, The Manners of answering the call of nature)

In another narration, it is written:

“The Messenger of Allah passed by two new graves and he said, ‘They are being punished, but they are not being punished for anything major. One of them was heedless about preventing urine from getting on his clothes and the other used to walk about spreading malicious gossip.” (Sunan Ibn Majah, Book of Purification and its sunnah)

One may contend, “But the Prophet Muhammad(sa) himself states in this hadith that standing when urinating is not a major sin”. This question was beautifully addressed by Hazrat Musleh-e-Maud(ra):

“Some people declare some sins as very severe sins and declare some as very minor; consequently, they do not take caution in abstaining from those sins [which they consider to be minor]. The Holy Quran demonstrates that sin cannot be categorised as serious or minuscule. According to the Holy Quran, miniscule sins are those which arise in man’s mind but he does not act upon it and serious sins are those which he acts upon … Hence, one should not consider any good deed or a sin to be miniscule.

“The ahadith record that the Holy Prophet(sa) was traveling somewhere and passed by a cemetery. There, he stated, ‘The inhabitants of these two graves are being punished for what they considered to be a miniscule matter, but in reality, it was a serious matter. They were miniscule matters in a sense that they could have easily abstained from them, but serious in a sense that they caused them to enter into Hell. One of them did not take caution in protecting himself from splashing droplets of urine on himself and the other would backbite.’ (Tirmidhi)

“Hence, no matter is miniscule; rather, the idea of a matter being miniscule or grave is relative. One may find an act that he does or can do, quite easy or miniscule, although it might be quite difficult or grave. He may find another act which he does not do or cannot do, quite difficult or grave, although it is quite ordinary and miniscule.” (Irfan-e-Ilahi, Anwar-ul-Ulum, Vol. 4, pp. 387-388)

So, what happens if you urgently need to attend to the washroom, but there is no clean place to sit? The Prophet(sa) has made an exception to this:

“The Messenger of Allah came to the garbage dump of some people and he urinated on it standing up.” (Sunan Ibn Majah, Book of purification and its Sunnah)

Yes, in exceptional circumstances, where it is impossible to remain clean while sitting, it is permissible to stand. But the exception does not make the rule. The rule remains: to sit while urinating. One should not stand and urinate in the sanctity of his home or the masjid.

Studies utilising ultraviolet rays and fluorescent liquid have shown that urinating in a standing position creates thousands of unseen droplets of urine. These droplets can splash back up to 36 inches onto the body of the person urinating. In other words, the body is soiled, clothes, the toilet and the floor whilst standing. (www.qssupplies.co.uk/splashback-study)

Do not use your right hand

“The Messenger(sa) of Allah said: ‘When any one of you enters Al-Khalaa [the toilet], let him not touch his private part with his right hand.” (Sunan an-Nasa’i, Book of purification)

“The Messenger(sa) of Allah would use his right hand for performing wuzu [ablution] and for eating his food, whereas he was used to using his left hand in the toilet and for other similar purposes.” (Riyad as-Salihin, Book of good manners)

Not talking while using the washroom

“A man passed by the Prophet(sa) while he was urinating and greeted him by the salaam. The Messenger(sa) of Allah said to him, ‘If you see me in this situation, do not greet me with the salaam, for if you do that, I will not respond to you.’” (Sunan Ibn Majah, Book of purification and its Sunnah)

“I never saw the Messenger(sa) of Allah come out of the toilet without first (cleansing himself) with water.” (Sunan Ibn Majah, Book of purification and its Sunnah)

Not urinating in the shower

“None of you should urinate in the place where he bathes.” (Sunan an-Nasai, Book of purification)

“The Prophet(sa) prohibited that a man should urinate in his bathing area. And he said, ‘It will only cause misgivings.’” (Tirmidhi, Book of purification)

Do not pray if you feel the urge to go

“The Messenger(sa) of Allah forbade a man to perform prayer when he was suppressing [the urge to go to the toilet].” (Sunan Ibn Majah, Book of purification and its Sunnah)

Hazrat Aisha(ra), in another narration from Sahih Muslim, said:

“I heard Allah’s Messenger(sa) say, ‘No Salat can be [rightly offered] with food brought [before the worshiper] or when he is resisting the urge to relive himself of the two filths [i.e. urine and feces].” (Bulugh al-Maram, Book of prayer)

The Messenger(sa) of Allah said:

“10 are the acts according to fitrah (nature): trimming the moustache, letting the beard grow, using the tooth-stick, cleansing the nose (al-istinshaq) with water, cutting the nails, washing the finger joints, plucking the hair under the arm-pits, shaving the pubic hairs and cleansing one’s private parts [after easing or urinating] with water. The narrator said, ‘I have forgotten the tenth, but it may have been rinsing the mouth.’” (Sunan Abi Dawud, Book of Purification)