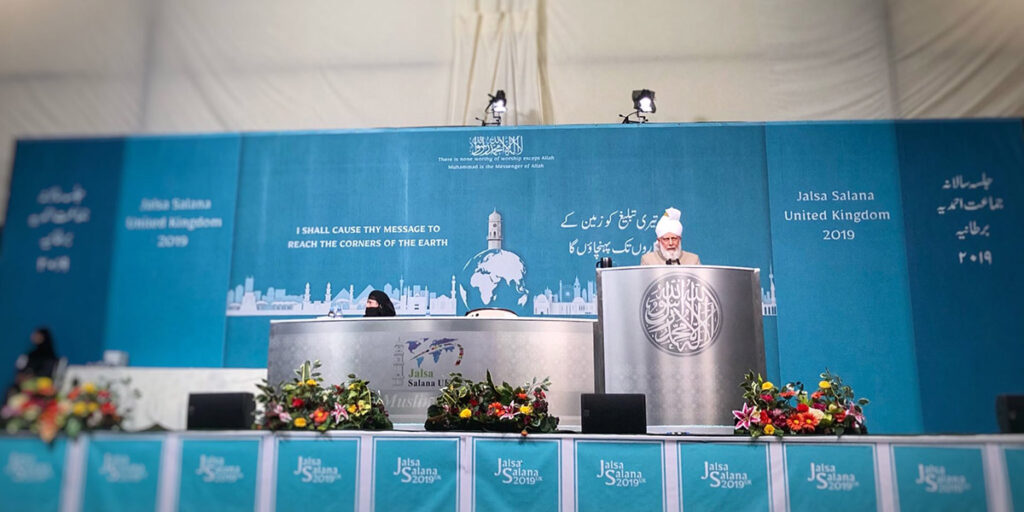 After Tashahud, Ta‘awuz and the recitation of Surah al-Fatihah, Hazrat Amirul Momineen(aa) recited verse 21 of Surah al-Hadid (chapter 57) and verse 19 of Surah al-Hashr (chapter 59), followed by their translations.

Huzoor(aa) said that he had received reports of women speaking during Jalsa Salana sessions. He said that they should be mindful not to talk among themselves during formal sessions in the future.

Huzoor(aa) then presented statistics that portray the religious condition of the world; people do not believe in religion and even those who do are of very low standards faith.

Ahmadis should care about saving the world from falling into the pit of fire, however, first we should ask ourselves if our own condition is such that we give preference to the love of Allah before the world.

The purpose of this Jalsa is to develop our spiritual, moral and educational conditions. We must ask ourselves whether these are the purposes we have come for or whether we are here for socialising only?

Referring to the Quranic verses recited at the outset, Huzoor(aa) said that Allah tells us that the world is temporary and we should not think it is to last forever. Allah has declared that the world is a mere pastime and sport. Can an intelligent man spend his whole life in leisure and games? In worldly terms, this is not possible and if one does this, then their lives ultimately result in ruin.

Huzoor(aa) said that some women write to him and inform him of their husbands who waste time watching television or in social gatherings and rely on social income for financial sport. Huzoor(aa) said that they have no real reason for this, and as a result, they cause restlessness and discord within their homes.

Allah says that if we do not fulfil the rights of Allah, His worship, serving faith and are totally engrossed in earning wealth, then this will be the sport and pastime of the world.

Referring to his opening address the previous day, Huzoor(aa) reiterated that the Promised Messiah(as) said that if we take the oath of Bai‘at, then our actions should be in accordance with the conditions of Bai‘at. Both men and women need to transform themselves to adopting piety.

Huzoor(aa) said that when he questions some men about their engrossment in worldly pursuits, they answer by saying that their wives demand too much of them. For this reason, they must work more and therefore cannot spare time for worship. Huzoor(aa) emphasised that such an excuse is nonsense; in such an instance, they are putting their wives and Allah on the same pedestal. They should fear Allah as this is no less than committing Shirk.

After we pass on to the next abode, Allah will not question us on how much wealth we left behind or the number of children we brought up. He will ask us about our good actions, whether we fulfilled His rights, whether we presented a good example before our children. He will ask us whether wives told their husbands to prefer Allah over the world. If a believer does not do so, then they will be like that hot gust of wind that razes crops to the ground.

Huzoor(aa) reiterated that these teachings are not just for women, but they are for all believers, including men.

During the time of the Holy Prophet, peace and blessings of Allah be upon him, the excuses of men about their wives were of such a nature that they would say, “My wife spends her whole time in worship and overlooks my needs.” And if women ever complained, they would inform the Holy Prophet(sa) that they did not take care of their own beauty as their husbands spent their time in worship alone. The Holy Prophet(sa) would advise men and women to fulfil the rights of their spouses along with worship.

The female companions would beautify themselves not for fashion or to show the world, rather they did so to create a pure atmosphere within their household.

Huzoor(aa) said that women should not put on make-up and walk around in the streets without purdah. Huzoor(aa) also highlighted that modesty is the true adornment of women and they should take pride in this. To say, “We have familial ties or such and such families are family friends and for this reason we do not observe purdah” is entirely incorrect.

When the hijab is left, it is then that immodesty spreads.

Huzoor(aa) recognised that there would be some press members present during his speech who might remark, “Look how these people draw rules for their women.” Huzoor said that we should not care about what others think, but rather we should follow what Allah has taught us. 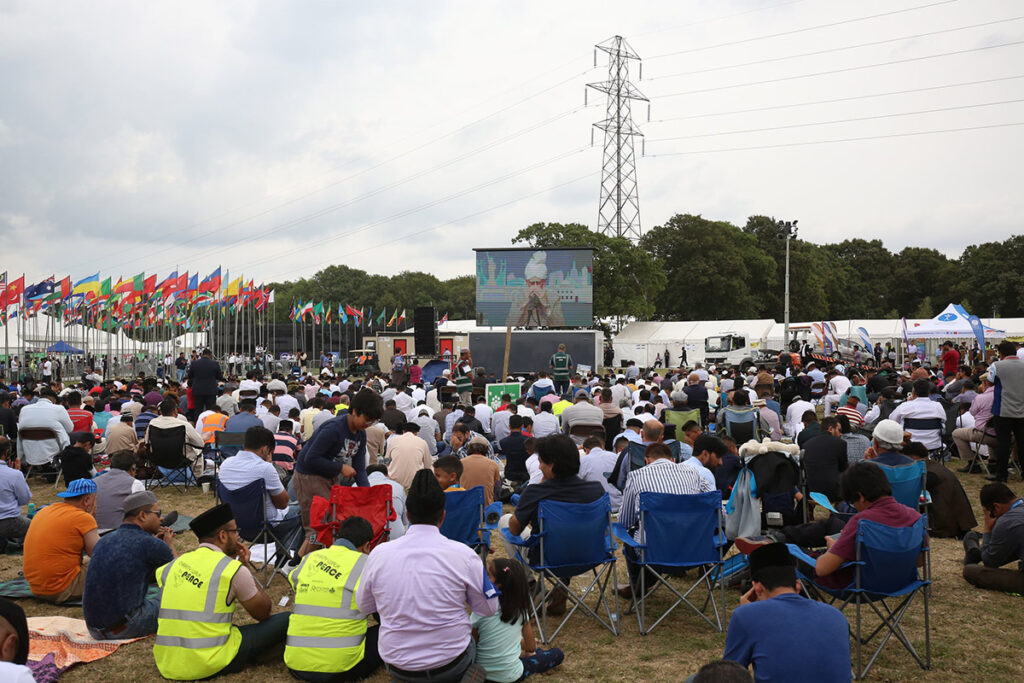 Boys should not have sleepovers at other houses either as this is important to uphold modesty.

If parents bring up their children according to religious values, then those children will also want to choose religious partners.

Once, the Holy Prophet(sa) warned women, saying that the woman who has gold jewellery made and flaunts it with great pride and shows it to other women and men, then they shall receive a great torment. Wearing jewellery is not forbidden, but being boastful and acting in a proud manner is incorrect. Showing beauty and jewellery should be for mahram relations [those relations with whom strict purdah has been excused by the Holy Quran].

Huzoor(aa) said that this Jamaat has a responsibility to bridge the gap between the awwalin [pioneers] and akharin [those of the latter days].

It is our choice, Huzoor(aa) said – do we wish to acquire the pleasure of Allah by following these companions or do we wish to follow Satan? Every Ahmadi should introspect and ask themselves whether they are following the examples of the Companions(ra) of the Holy Prophet(sa) or not.

The second verse of the Holy Quran Huzoor(aa) was one that is recited in the Nikah ceremony. It highlights the need to be righteous and the importance of doing deeds that shall become useful in the Hereafter. It is righteousness and fulfilling the rights of Allah and his creation that shall be questioned. Fashion and worldly wealth shall not be examined.

If we leave pious children behind, then they will aid in our own spiritual development as well. If mothers bring children up in a proper manner, then the children will be pious and righteous.

Allah knows what is hidden and He cannot be fooled. He knows what we conceal and therefore knows exactly how well we follow the teachings of the Promised Messiah(as).

Today’s mothers and those girls who will Insha-Allah soon become mothers should plan to develop their spiritual conditions and increase their knowledge so that they are able to bring their children up in a proper manner. They should be able to teach their children that the world is not our aim, but rather it is following the commandments of Allah.

If our own spiritual conditions are not up to the mark, we cannot expect any change within our own children. If we want our children to become good spiritual servants of Allah, then proper planning and action is required.

Hazrat Amirul Momineen(aa) reminded the audience that Allah does not care how pious one’s parents were; it is only our own actions that will count – they will be responsible for their actions and we, our own. The Holy Prophet(sa) reminded his daughter, Hazrat Fatima(ra), that she would not be forgiven merely because she was the daughter of the Prophet(sa). Only her good actions would attract the forgiveness of Allah.

Concluding his address, Huzoor(aa) prayed for Ahmadi parents to prefer Allah over the world and bring up such children who can set their eyes on faith rather than the world. 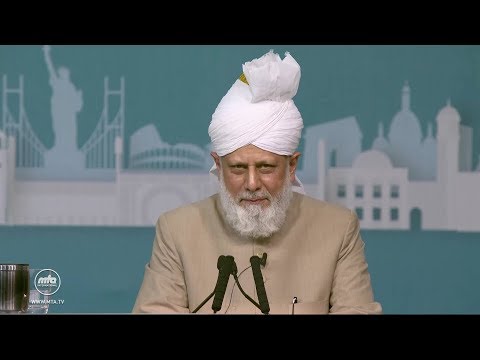 Do women have an unfair share in inheritance?
‘Not all heroes wear capes… sometimes, they wear hijabs.’
Why does Islam allow polygamy?
Living as a Muslim woman in modern-day society
2 Female Witnesses for 1 Male Witness?
Go to Top
Start Here
Research
Contact Us
Follow Us
Copyright © 2023 Ahmadiyya Muslim Community. All rights reserved.
Privacy Policy | Use of Cookies | Terms of Service | Sitemap
Start Here