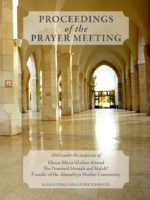 Proceedings of the Prayer Meeting

by Hazrat Mirza Ghulam Ahmad, The Promised Messiah and Mahdi(as)

Held under the auspices of Hazrat Mirza Ghulam Ahmad, The Promised Messiah and Mahdi(as)

February 2, 1900 was the day of Eidul-Fitr. Hazrat Mirza Ghulam Ahmad(as), the Promised Messiah and Mahdi, advised the members of the Jama’at to hold a meeting on that day and offer prayers for the success of the British government. In his address, he commented on the chapter An-Naas of the Holy Qur’an and reminded the audience of the duties they owed to the government, especially because of the goodness of the government which it had displayed in various ways. After the address, he told the gathering to pray for the victory of the British government in the battle that was being fought in Transvaal and then led a silent prayer for this purpose. Some amount was collected to be sent for the injured in this battle. This gathering of the Jama’at came to be known as the Prayer Meeting.

Read the book in these formats