‘Not all heroes wear capes… sometimes, they wear hijabs.’

by Nudrat Ahmad, The Review of Religions.

‘Not all heroes wear capes…sometimes, they wear hijabs.’ – These are the words used by the FOX News Broadcasting company in the USA to describe  the recent heroic actions of a 17 year old Ahmadi Muslim woman in Oshkosh, Wisconsin during a shooting in her high school. The viral video that captured the world’s attention showcases how the young girl, Duaa Ahmad, calmly directed around 100 fellow students to refuge in the Ahmadiyya Muslim mosque across the road from the school, thereby sheltering them from danger.

On the 3rd of December 2019, a shooting took place at Oshkosh West High School. Students ran from the school building, not knowing the danger they were facing. Duaa Ahmad ran across the street to the Ahmadiyya Muslim mosque and through some very quick thinking, punched in the code to open the mosque and usher in 100 of her peers. She courageously stayed outside and kept the door open until all the students were inside safely. The CCTV footage of Duaa outside the mosque directing the children went viral.

Duaa, in an interview with FOX News, said ‘People have always taught me to help others first’, and ‘that is just how I am raised‘. In her interview with CNN Duaa humbly tells the interviewer that, ‘I just happened to be in that situation; I just did what anybody else would’ and that ‘I was there at the right time in the worst situation‘. Duaa’s hijab is a very visible expression of her faith, yet the values that come with that faith are unfortunately provoking surprise in many, as they view this young Muslim woman and her display of courage. 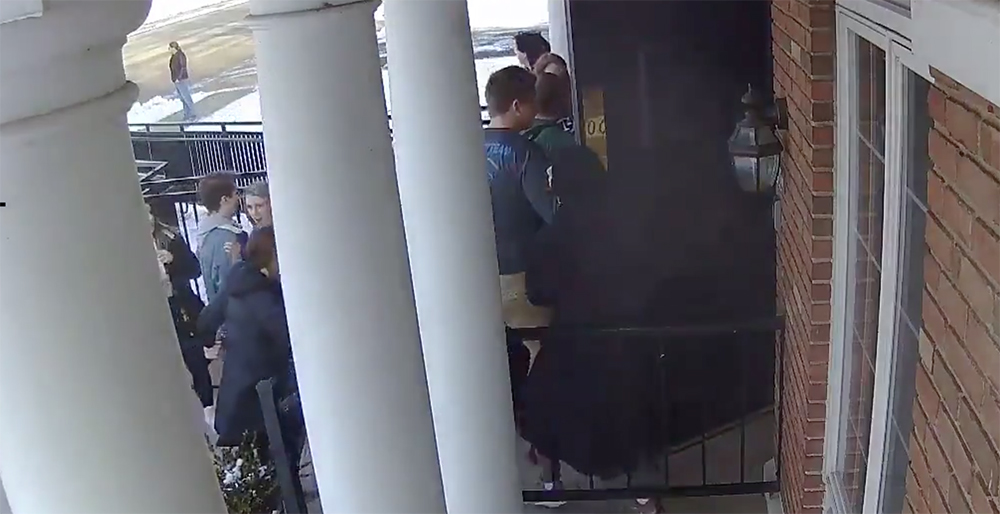 The video is an invigorating challenge to the usual narrative painted by some western media of ‘oppressed’ and ‘subservient’ veiled Muslim women. Duaa is getting the well-deserved attention and respect for her tremendous courage in the media. However, it is of note that this act of heroism by a female Muslim is far from an isolated incident.

Since the earliest days of Islam, Muslim women have repeatedly demonstrated their unwavering faith and courage. During the Battle of Uhud between the Mekkans and Muslims in 624 CE a female companion of the Holy Prophet(sa), Hazrat Umme Ummaarah(ra), fought in the battle alongside her husband and sons. Renowned for her bravery in coming to the defence of the Holy Prophet(sa) during battle where other men had wavered, she fought fearlessly against the enemy. The Prophet of Islam(sa) witnessed this steadfast courage and in the aftermath of the battle, stated the names of several brave men and then proclaimed.

Another Muslim woman, Hazrat Safiyya(ra), the aunt of the Holy Prophet(sa) also participated in many battles. At the time of the battle of Uhud, when due to some confusion the enemy began to surround the Muslims. Hazrat Safiyya(ra) heard about the situation and headed out of her house with a spear in her hand towards the battlefield. On her way she saw some fleeing Muslim soldiers, and challenged their honour proclaiming ‘Have you left the Holy Prophet Muhammad(sa) behind?’ (Hazrat Saffiyya(ra) , Islam International Publications) . Her emphatic rebukes directed the men back to the battlefield.

At the time of the Battle of the Ditch (Khundaq), women and children were moved to a fortress at one side of the city of Madinah for their protection. Hazrat Safiyya(ra) was among these women and children. A spy from the tribe Banu Quraiza tried to infiltrate the fort and get information about their location. Hazrat Safiyya(ra) recognised what was happening right away and informed on the spy. Since the Muslim men were not able to step away from the fight and pursue the spy, Hazrat Saffiya(ra) herself went after the spy and fought and killed him and thus saved the lives of the women and children in Madinah.

These shining early examples were merely the beginning of a line of Muslim women that has followed through the centuries – a lineage of courage, integrity, and the will to help and protect others – the same values that Duaa has so perfectly personified. These values remain very dear to both Muslim men and women across the world.

In fact, it was only a few weeks before the Oshkosh incident, in November, that a video surfaced of an antisemitic incident on the London tube. Whilst a man hurled abuse at a Jewish father and his young children, who were wearing the traditional Jewish skull caps, the only passenger to come to the family’s defence was none other than a hijab-donning Muslim woman. Despite the intensity of the situation and danger of escalation, she chose to act selflessly in aid of the family, arguing with the aggressive passenger about his actions. She was rightly heralded as a hero for her courage following the incident.

Muslim women are a far cry from being oppressed, voiceless and subservient. A modestly dressed Muslim woman can show the heroism that any human – no matter their race, gender or religion, is capable of.

So yes, it’s true – not all heroes wear capes. In fact, on reflection, never in my life have I known a real-life hero to wear a cape…But I have known plenty of heroic hijab-wearing Muslim women.