After Tashahud, Ta‘awuz and the recitation of Surah al-Fatihah, Hazrat Amirul Momineen(aa) recited verse 22 of Surah al-Mujadalah from the Holy Quran followed by its translation. The translation of the verse is “Allah has decreed: ‘Most surely I will prevail, I and My Messengers.’ Verily, Allah is Powerful, Mighty.”

Hazrat Amirul Momineen(aa) explained that prophets have to endure great hardships when they are raised by Allah. It seems as the prophets will be defeated by enemies, but Allah grants them ultimate success. Huzoor(aa) said that the verse he recited points towards this victory.

The Holy Prophet, peace and blessings of Allah be upon him, went through this as well. His enemies thought they would destroy the weak Muslims but the complete opposite happened.

On numerous occasions, the Promised Messiah(as) received the revelation, “Allah has decreed: ‘Most surely I will prevail, I and My Messengers.’”

In Noah’s Ark the Promised Messiah(as) asks if people think that enemies will stop the prophet of Allah i.e himself. The answer is that it is not possible and “Allah has decreed: ‘Most surely I will prevail, I and my Messengers.’”

At an occasion, the Promised Messiah(as) said that the one who is from Allah can never go to waste. And that Allah grants victory to His prophets.

The meaning of “victory” is to establish the message and truthfulness of Allah in the earth. Prophets come to sow the seed; this is the “victory” that is followed by a second manifestation that cultivates the seed sowed by the prophet.

This second manifestation of Khilafat can be observed through the success of Jamaat-e-Ahmadiyya. Huzoor(aa) said that the message that was given from a small hamlet is now echoing throughout the world.

The history of Jamaat-e-Ahmadiyya bears witness to the promise of Allah that His Prophet will prosper.

Hazrat Amirul Momineen(aa) expressed that he would relate incidents on how Allah has and is fulfilling this promise.

A gentlemen from Cameroon phoned the Jamaat and said that his son received a pamphlet that was entitled, “The Messiah has come”. The man said he was lazy in offering namaz prior. Once, in a dream and prior to seeing the Jamaat pamphlet, he saw a white bearded man who told him to get up and offer namaz and to be consistent in it. Later, he came across MTA Africa and saw the exact same white bearded man delivering a lecture. The man did not know that there was a Jamaat in Cameroon as well. Through the pamphlet he came in contact with the Jamaat and was told about Hazrat Khalifatul Masih V(aa). The man testified to the truthfulness of the Jamaat and did Bai‘at. Huzoor(aa) said that the man by the grace of Allah is now consistent in prayers and is increasing his knowledge.

A lady from Tunisia states that she had illnesses from a young age. She was unaware about religion and only knew that she was a Muslim. At that time, in a dream, she saw a man leading her in prayers and she declared that this was the correct manner of worship. The lady would listen to Sheikh Hasaan’s lectures on the signs of the day of judgement. She would ask herself whether such signs would manifest at the coming of the Messiah and whether he would come. She then saw in a dream that she was in a hospital, time was passing very quickly and she wanted to leave the hospital. She then heard a voice which said “do not be afraid, I will take you home”, the person who said this was a man who had a thick beard and wore a turban. Upon asking who he was, the man said that he was “Muhammad”. She woke up and felt as if it was real. When she told her sister, her sister expressed to her that Satan cannot embody the Holy Prophet(sa). Later, she came across MTA Al Arabiya and saw the picture of Hazrat Amirul Momineen(aa) in which Huzoor(aa) quoted the Promised Messiah(as). When a picture of the Promised Messiah(as) was shown on screen, she was astonished as it was him who she saw in her dream as “Muhammad”. The lady then accepted Jamaat-e-Ahmadiyya.

There is a city in Tanzania in which our missionary was persecuted. Now there are regular radio programmes of the Jamaat in this city. As a result of these programmes, the son of the Imam of the city has accepted Ahmadiyyat along with others. Huzoor(aa) said that now, none can raise a voice against Ahmadis in this city and people say that no scholar there can complete with Ahmadi Muslims in knowledge.

Hazrat Amirul Momineen(aa) mentioned an incident from Nigeria. Mubarak Sahib, an Ahmadi preacher, began to show Huzoor’s(aa) live Friday Sermon. After Huzoor’s(aa) Friday Sermon he would deliver a short sermon of his own and offered Jumuah prayers. A non-Ahmadi gentlemen commented on this and said that showing the Friday Sermon of Huzoor(aa) was an innovation. The non-Ahmadi gentlemen was told that this was not an innovation and that he also should listen to the sermon. After listening to them, the gentlemen expressed that he was shaken by the Friday sermons of Hazrat Amirul Momineen(aa) and later accepted Ahmadiyyat.

Akhtar Sahib from India says that he saw a man in 2007 in his dream. The man’s face was full of light and spirituality and left a deep impression on him. In 2009 when he was in Pakistan he heard about the agitations against Jamaat-e-Ahmadiyya. He contacted the Jamaat and later saw Hazrat Khalifatul Masih V(aa) in a dream where Huzoor(aa) was taking Bai‘at of people. In the dream, when Akhtar Sahib put his hand forward for Bai‘at, his hand could not reach. People from behind him exclaimed that he could not reach this. Akhtar Sahib continued to phone the Jamaat and learn more about the Jamaat. After another dream and even visiting Qadian Akhtar Sahib could not gather the strength to perform Bai‘at. After some time Akhtar Sahib attended a book fair in Shimla, India and after prayers he accepted Jamaat-e-Ahmadiyya.

Hazrat Amirul Momineen(aa) articulated another incident about patience. A gentlemen came to the Jamaat mission house in Mali and performed Bai‘at. His household greatly opposed him and his father even beat him and threw him of the house. Despite this, the Khadim would continue to grow in sincerity towards the Jamaat. One night, the Khadim came to the mission house and said that his father had thrown him out. The Jamaat mubaligh prayed to Allah for his father to show mercy. The next day his regretful father came to collect his son and told him that he was allowed back and could continue to believe in Islam Ahmadiyyat. Hazrat Amirul Momineen(aa) said that the Khadim contributes to Chanda above his capacity and is full of sincerity and faith.

Huzoor(aa) mentioned an incident from India that a missionary, Zulfiqar Ali Sahib narrated. This year a ship from Bangladesh was about to sink but the Indian army saved the ship. When the local Jamaat found out, they collected some donations and gave it to those on board. They also did tabligh to them and some of them even accepted Ahmadiyyat.

A lady from Benin prayed that if she was given a job, she would accept the Jamaat. Prior, she had applied to three jobs but was rejected on all occasions. The Mualim sahib explained to her that such conditions should not be placed, religion and worldly affairs should not be mixed. He told her to first do Bai‘at and then pray. The lady accepted and did Bai‘at and became an active Jamaat member. After Bai‘at, the very place that rejected her, contacted her and said they would offer her the job despite her lack of experience.

Hazrat Amirul Momineen(aa) voiced that many write and present lots of worldly conditions after which they will accept Ahmadiyyat. Huzoor(aa) said that this was not the right manner.

Amir Sahib Congo Kinshasa states that a Jamaat Mualim went to a village for tabligh. A man, Abdul, said to the Mualim that Ahmadis do shirk, have a separate prophet and even a different book from the Quran. The Mualim sahib explained to them the reality and performed namaz as well. When the man realised that Ahmadis are no different, he accepted that he was wrong and all that the so-called clerics had told them about Ahmadis was false. As a result, more than 50 members of the village accepted Ahmadiyyat.

A village in Mali accepted Jamaat-e-Ahmadiyyat. The villagers had no religion prior but are now Ahmadis. The village chief told the Jamaat that they were waiting for the appearance of the Imam Mahdi for a very long time. The chief expressed that he was very happy that now the message of the Jamaat reached him and unfortunately his father had died, who also was awaiting the arrival of the Imam Mahdi.

Hazrat Amirul Momineen(aa) narrated an incident from Ivory Coast. An area was purchased by the Jamaat for a mosque and mission house. Illegally, some people tried to take the property from the Jamaat and took the matter to the governor. The governor gave the decision in favour of the Jamaat and said non can interfere with the building of the Jamaat Mosque. On the foundation of the mosque, the governor even attended. A lady, who supposedly would perform magic, and was part of the group that wanted to illegally take the Jamaat’s property said that Ahmadis will themselves leave this property. However, the lady fell ill to such an extent that others would not go near her has she had contracted a contagious disease. Despite her enmity, the local Mualim went to visit the lady and ask of her health. The lady later died. The locals, observing this, saw it as a great sign for the truthfulness of the Jamaat.

Hazrat Khalifatul Masih V(aa) narrated an incident from India. This year during a Jamaat book stall, there was great opposition from a Muslim group. They wrote to the book fair committee in which they stated that Ahmadis are kafir and are promoting the wrong translation of the Holy Quran. They demanded to have the Jamaat bookstall prohibited. This was rejected. In return, the Muslim group called the media and expressed their hate towards the Jamaat. They said that Ahmadis are kafir and Pakistan has also declared them this. As a result, the media’s attention turned towards the bookstall of the Jamaat and there were lots of reports on the Jamaat. This turned into a great opportunity for tabligh and the message of the Jamaat was delivered.

The Promised Messiah(as) openly challenged those who opposed him and said that he would always come out as victorious as Allah has promised this to him.

Huzoor(aa) said that Allah is guiding people towards the Jamaat in miraculous ways. However, those, who are Ahmadis by birth need to play their role in spreading the message of Islam Ahmadiyyat. In the same manner, new converts need to spread the very message that guided them to the truth.

Hazrat Amirul Momineen(aa) laid stress on a need to carry out tabligh.

“Today, a claim which originated from a small village, now echoes through the corners of the world” – Hazrat Mirza Masroor Ahmad more 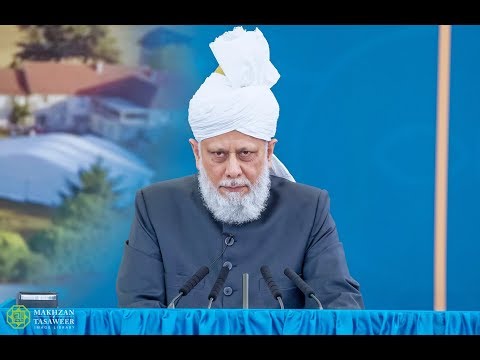 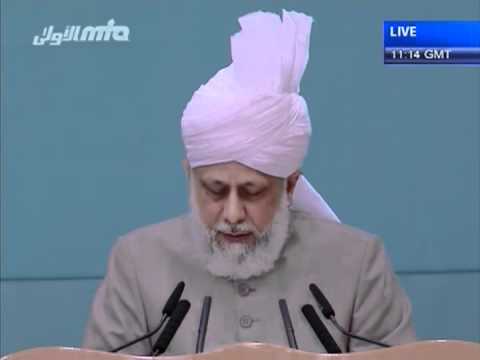 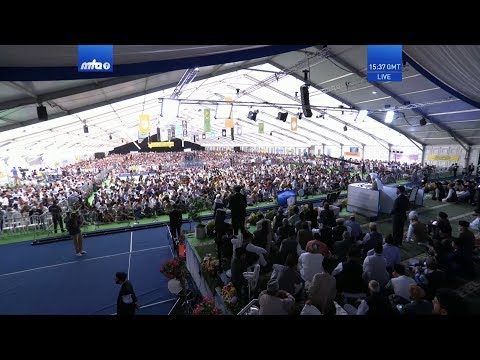 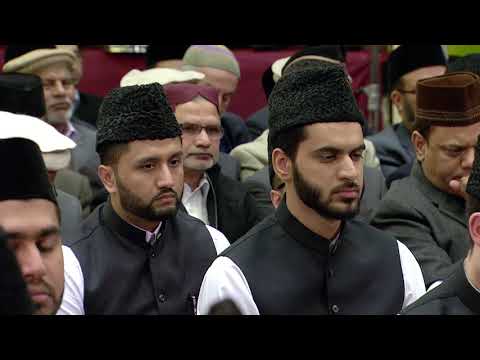