Today we are celebrating Eid-ul-Adha, known as the festival of sacrifice. It serves as a reminder of that example of sacrifice set over 4000 years ago. Despite so much time having elapsed, the believers have kept this memory alive and it has not diminished. Yet there will be those who celebrate this Eid merely as a festival; who sacrifice animals merely as an occasion of happiness. However, a true believer remembers the importance of that sacrifice and the spirit of that sacrifice and remembers it as it should be remembered.

His Holiness(aba) said that recounting this sacrifice of a father and son makes a true believer emotional. There are certain pains in the world which one forgets eventually and they move on with life. But this incident is one which God Almighty preserved in the Holy Qur’an, thus making it a memory, and a standard for eternity; and how lofty an example it is. A man reaches close to the age of 90 and only then is granted a son. Then he receives the commandment from God to sacrifice his only son. How great an example of sacrifice this is of Abraham(as), that upon hearing this commandment he lay his son down and was ready to sacrifice him.

The obedience of Father and Son

His Holiness(aba) said that not only did the father, Abraham(as) show obedience, rather the son, Ishmael(as) also proclaimed that he was ready to accept whatever had been commanded.

His Holiness(aba) then said, we find that Abraham(as) was so kind hearted, that his kindness was not limited only to kith and kin but extended even to those who were his enemies. The Holy Qur’an describes him as being ‘kind’ and ‘tender-hearted.’ So imagine, if this was his character, then would he not have felt for his son, would he not have felt pain? Yet he was ready to offer this sacrifice solely for attaining the pleasure of Allah.

The Holy Qur’an tells us Ishmael(as) was also prepared for this sacrifice, making him an exemplary model. Why was he able to do this? Because a true understanding of God was established within him, and he realised that sacrifice was the true path to success. Thus, our hearts yearn and our eyes fill with tears. But even still, that same feeling may never come about in our hearts which came about in the heart of Abraham(as) so long ago. He thought that he had an opportunity to become closer to God and attain His love. This was not a mere thought, rather anyone who knows history, anyone who had read the Holy Qur’an and anyone who recites durud [invoking salutations upon the Holy Prophet(sa)] knows that he acted upon this thought.

Sacrifice is not a Favour, but an Honour

His Holiness(aba) said that Abraham(as) did not think that he was carrying out a great act or was doing any sort of favour, rather he understood it to be a great honour and privilege that he had been chosen and granted the opportunity to offer such a sacrifice and attain the nearness of God. Thus, there is no sacrifice we can present that can compare.

Yet presenting even the smallest sacrifice can be the result of immense blessings. Ahmadis all around the world have borne testament to this. So many Ahmadis write about the sacrifices they had the opportunity to present, and how they were rewarded immensely, some within minutes of their sacrifice. But this fervour should not be temporary, but should be a lasting zeal. Striving to attain the nearness of Allah and His pleasure should be a lifelong endeavour. Then will a pure atmosphere come about in our lives and our homes; and this will leave a positive impact on the next generations.

When Abraham(as) was about to sacrifice his son, God stopped him and said,

‘Thou hast indeed fulfilled the dream.’ Thus indeed do We reward those who do good.’ (The Holy Qur’an 37:106)

The Reward of Sacrifice

His Holiness(aba) then asked, how does God reward those who do good? He grants them His nearness and affection. But after attaining this, the sacrifices of Abraham(as) did not end, nor were they limited to just Abraham(as) and Ishmael(as), but the same spirit of sacrifice came about in his wife Hagar(as). This was to show, that when one strives to inculcate the true spirit of sacrifice, it can have a positive impact on one’s wife and children. It was thus that having been commanded by God, Abraham(as) took his son Ishmael(as) and his wife Hagar(as) to a barren land (Mecca), where there was no sign of life for miles. With minimal water and a few dates, Abraham(as) left them in this land. He knew that these minimal provisions would not last for long. But he also knew that this was a commandment from God, and so he put his complete trust in God. Hagar(as) perceived that this was not  a temporary arrangement but she and her son would have to remain there on a permanent basis. And so she asked her husband, ‘will you leave us here?’

His Holiness(aba) quoted Hazrat Musleh Mau’ud(as) where he writes that Abraham(as) was so tender-hearted and so kind that he would never leave his wife and child whom he loved so much in such a place of his own volition. But he had received a commandment of God. On one hand was the love of his wife and children, on the other was the immense desire and knowledge that this sacrifice would be a source immense blessing from God Almighty and His pleasure. Thus, a great wave of emotions overcame him and he was not able to respond. When Hagar(as) asked him if this was a commandment from God, Abraham(as) raised his hand to the heavens to signal that indeed it was a commandment from God. Upon this, Hagar(as) said with immense conviction that if this was the case, then God would never leave them and let them go to waste.

Having already seen such exemplary models of sacrifice, her belief and conviction in God was resolute. And so she was able to utter these resounding words. Upon hearing her words, which surely reached the Throne of the Almighty, God responded by saying that He would surely never let them go to waste. And just as was expected, God rewarded them immensely. It was from their progeny that the Seal of Prophets the Holy Prophet Muhammad(sa) came. Abraham(as) became father of spirituality and it is through his example and the standard set by him that one is able to reach God. God brought the entire world to the feet of the progeny of Ishmael(as) through the Holy Prophet(sa). The sacrifices of Hagar(as) are commemorated by millions upon millions who flock to perform Umrah and Hajj.

Correct Way of Commemorating this Sacrifice

Thus, this day is to remind us of their esteemed example of sacrifice. But we must ask ourselves, is it enough to remember and recount these sacrifices? No. Rather we must model our lives after them. Women should look at the example of Hagar(as) and see what they must do to inculcate this example within themselves. Some women of the community say that whilst repeating their pledge they remain silent upon the portion oath about being prepared to sacrifice their children, as they are not ready. But if one has complete faith in God, then such a thought cannot come about. When we have pledged to give precedence to our faith over all worldly matter, then we must be ready to fulfil this as well. If our men try to implement the standard set by Abraham(as), then the same will reflect in the women and children. Thus, first men must set their example of sacrifice if we wish to see the same established in women and children.

His Holiness(aba) said that we have accepted the Promised Messiah and Mahdi(as) of this age, the true servant of the Holy Prophet(sa), whom God has called by that name of Abraham(as) on various occasions and in various revelations. If we want to raise the flag of Islam in the world, then we must adopt the model of sacrifice which has been established. If we start acting upon our pledge of giving precedence to the faith over all worldly matter, then we can bring about a revolutionary change in the world.

God Almighty established this community through the Promised Messiah(as) so that the same blessings may return to the world which are associated with the true believers of the Holy Prophet(sa). Thus, we must be ever-ready to present sacrifices. This revolution will never come about in the world without sacrifices, nor can it.

His Holiness(aba) said that, to those mothers who becomes silent during their pledge when they are called upon to be ready to sacrifice their children – some mothers feel that their children will not be able to survive on meagre means or has potential to earn much more – when these mothers have pledged to give precedence to their faith and have presented their children to serve the faith themselves, then these excuses hold no meaning.

His Holiness(aba) said we do not care for worldly power, means and wealth; our only concern is how we can use such means to propagate the message of Islam in the world, how we can established the unity of God and how we can establish kindness in humanity. Thus, more and more people should present themselves and go to Jamia to become missionaries, so that we may spread this message and quickly as possible. These all require sacrifices. No change can come about by merely listening to stories of sacrifice, rather they must be implemented. Every nation around the world will have to present sacrifices. Thus can a unity come about in the world, and thus will the purpose of building the Ka`bah, a symbol of the Unity of God be fulfilled

May Allah establish within us a true understanding of the Unity of God and enable us to present sacrifices, such which will prove fruitful in this world and in the next

A Request for Prayer

In the end, His Holiness(aba) urged the community to pray for those who are imprisoned in the way of Allah on the basis of false charges due to their faith, which also includes a lady – only because they have accepted the Promised Messiah(as). Pray for the families of martyrs. Pray for the missionaries, mu’allimeen and life-devotees of the community, that they may fulfil the pledge of devotion. The mu’allimeen in Africa, despite limited education are doing great work. May Allah remove the difficulties of all those going through hardships. May He keep everyone safe from the evils of the clerics and heretics. This Eid, clerics in Pakistan have raised a cry that there will be cases against Ahmadis who offer sacrifices of an animal on this ocassion. May we be able to do our part in fulfilling the purpose of the advent of the Promised Messiah(as). Aside from Pakistan, Ahmadis are facing hardships in other parts of the world as well such as some countries in Africa there is opposition and hardship; but Ahmadis remain resolute in their faith.

Finally, His Holiness(aba) said ‘Eid Mubarak’ to all Ahmadis across the world.

His Holiness said Ahmadi Muslims must learn lessons from Prophet Abraham (peace be upon him) and his family, whose sacrifices are marked on the day of Eid-ul-Adha more 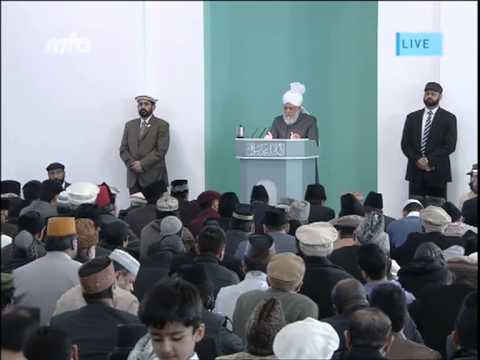 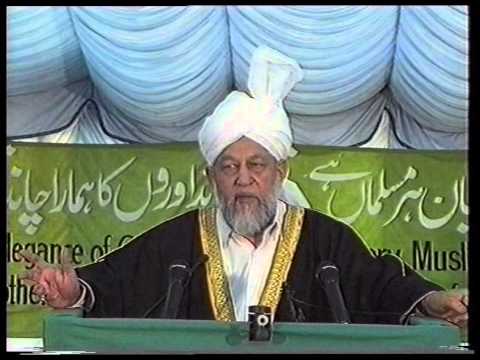 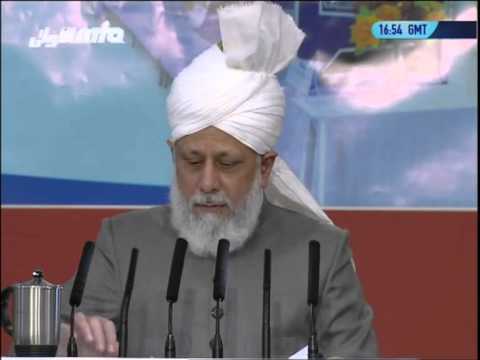 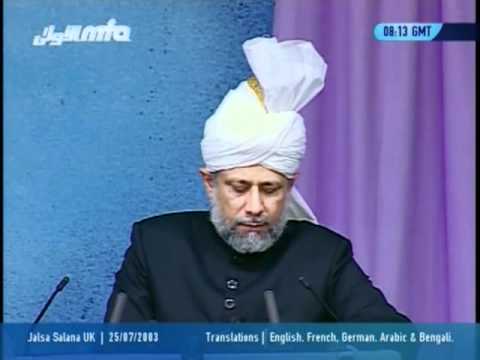 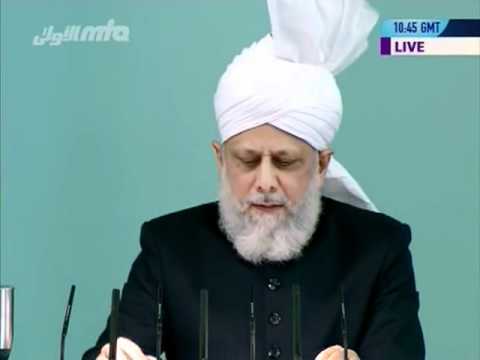