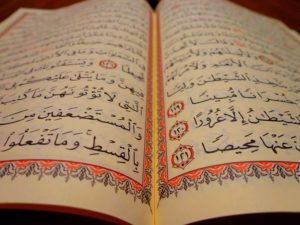 The Holy Quran is a compilation of the verbal revelations given to the Holy Prophet Muhammad(sa) over a period of twenty three years. The Holy Quran is the Holy Book or the Scriptures of the Muslims. It lays down for them the law and commandments, codes for their social and moral behaviour, and contains a comprehensive religious philosophy. The language of the Quran is Arabic.

The Holy Quran is divided into 114 Surahs or Chapters and each Chapter consists of individual Ayaat or verses. There are in total 6,348 verses in the Holy Quran. The Surahs are of varying lengths, some consisting of a few lines while others run for many pages. Surah al Baqarah (Ch.2) is the longest Chapter comprising 287 verses while Surah al Kauthar (Ch. 108) is the shortest with only four verses including the tasmia.

The text of the Holy Quran has remained unchanged over the past 1400 years. And this is not strange since God says in the Holy Quran that He Himself will guard this book:

What Does The Holy Quran Contain

To the Muslims, the Quran is the Word of God and contains complete guidance for mankind. Much of the Quran is about God, His attributes and man’s relationship to Him. But it also contains directives for its followers, historical accounts of certain prophets and peoples, arguments for accepting Muhammad as a genuine Prophet and good news for the believers and warnings for the disbelievers. Broadly speaking, the contents of the Holy Quran fall into five main categories:

Why is Bismillahir Rahmanir Raheem counted as the first verse?
Was the Holy Quran perfectly preserved?
Understanding the History and Differences of the Dialects of the Holy Quran
The sequence of verses of The Holy Quran
Significance of number four
Go to Top
Start Here
Research
Contact Us
Follow Us
Copyright © 2022 Ahmadiyya Muslim Community. All rights reserved.
Privacy Policy | Use of Cookies | Terms of Service | Sitemap
Start Here