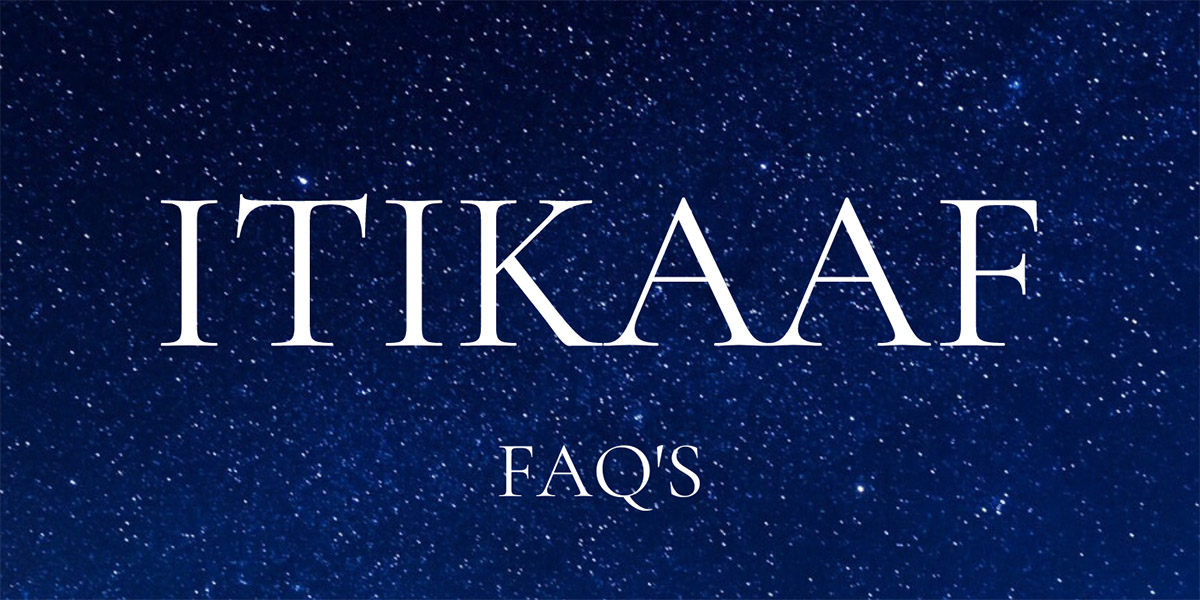 The definition of the word, Itikaaf, is to isolate oneself or remain attached to something. According to Islamic terminology, Itikaaf means to seclude oneself in the mosque with the intention of observing Itikaaf while keeping a fast. Itikaaf, like the institution of fasting, is found in other religions. For instance, the Holy Quran states (2:126):

And remember the time when We made the House a resort for mankind and a place of security; and take ye the station of Abraham as a place of Prayer. And We commanded Abraham and Ishmael, saying, ‘Purify My House for those who perform the circuit and those who remain therein for devotion and those who bow down and fall prostrate in Prayer.’

What are the rewards of Itikaaf?

The following Hadith shed light on the blessings of Itikaaf:

“Whoever stands in prayer during the nights of Ramadhan out of faith and seeking reward shall have their previous sins forgiven.” [Bukhari & Muslim]

“Whoever observes Itikaaf for even one day, seeking thereby Divine nearness, Allah will place between him and the Fire three ditches wider than the distance between the east and the west.”

“Whoso engages in Itikaaf is protected from every sin and also earns the rewards of righteous deeds which were being done prior to Itikaaf as if they are still being done.” [Ibn Majah]

“One who secludes himself for Itikaaf in true faith and hope (for the reward of Allah), shall have all of his previous sins forgiven.” [Kanzul Ummal]

When can I sit for Itikaaf?

A person may observe an Itikaaf whenever one desires, however, to sit Itikaaf during the last ten days of Ramadhan is the Sunnah (practice) of the Holy Prophet(sa).

“Whenever the Holy Prophet(sa) made the intention to do Itikaaf, he would offer the Fajr prayer, and then enter his area set for Itikaaf.” (Muslim)

Where should I do Itikaaf?

The ideal and preferred place to observe Itikaaf is a Jami’ mosque, i.e., a central mosque in which Jumuah Prayers are held so that one may offer the five daily prayers in congregation and may attend Jumuah service without having to leave the mosque.

The Holy Quran enjoins to observe Itikaaf “while you remain in the mosques” (2:188) because mosques are places specially designated for the remembrance and worship of Allah, and the traditions also substantiate observing Itikaaf in the mosque.

If circumstances do not allow one to offer it at the mosque, can it be done at home?

“Itikaaf can be offered outside the mosque, but it will not carry the same blessings as the one offered at the mosque.” (Farmoodat-e-Musleh Maud pg 171)

Allah knows and understands compelling conditions. He will reward us and judge us based on our intentions.

Women may also observe Itikaaf in a mosque but it is better that they observe it at home in a place designated for prayers. The Hanafi book of Jurisprudence, ‘Al-Hidaya’, states: “A woman should do Itikaaf in the “prayer area” of her home.”  Every home should have a ‘Masjid-ul-Bait’ (prayer area designated in the house) where during hardships one can go and pray. This brings many blessings and was the way of the Companions(ra) of the Holy Prophet(sa). Women should offer prayer there and men should offer their voluntary (Nawafil) and Sunnah prayers there. In exceptional circumstances when there is no other mosque nearby, a man may also observe Itikaaf in this place.

What happens if a woman’s menstrual cycle begins during Itikaaf?

If a woman’s menstrual cycle starts during Itikaaf, she must discontinue the Itikaaf since it is improper to remain in the mosque in that state and she is not liable and able to fast.

One should begin the Itikaaf with a pure intention, for:

“Actions are judged by the intentions they are done with”. (Bukhari)

Here is how the Holy Prophet ﷺ would supplicate going to the Mosque:

“O Allah! I ask You by the right of supplicants who pray to You and by my own right due to coming on foot for prayer. I did not leave my house owing to any kind of pride, or desire to boast or be seen, or gain a better reputation. Rather, I approach You fleeing from my sins and shortcomings, and fearing Your Wrath, and seeking Your Pleasure. So I beg You to protect me from the Fire and forgive my sins. Surely, there is none to forgive sins except You.” (Ibn-e-Maja)

There are no prescribed words of Niyyat for starting the Itikaaf. A person who wishes to observe a ‘Masnun Itikaaf’ (Itikaaf done by Holy Prophet(sa)) should have a firm intention to stay in the mosque for ten days, barring any unforeseen circumstances, and should submit his entire being at the threshold of Almighty Allah, saying:

“O Allah, I swear I will not go from here until you have mercy upon me.”

What if I cannot do Itikaaf for all 10 days?

It will not be considered a ‘Masnun Itikaaf’. However, the general principle of Islamic Jurisprudence (‘fiqah’) is that, “even if something cannot be done completely, it should not be left entirely.” Therefore, if one cannot do everything according to the ‘Masnun Itikaaf’ then one can lessen some things. For instance, one can reduce the number of days if unable to observe it for ten days.

Regarding the fast of Ramadhan, which is obligatory, Allah grants many concessions to believers who are “sick or on a journey” and states that He desires “to give you facility and ease…not hardship” (2:186). So for Itikaaf, which is a voluntary act of worship, He surely would appreciate and reward someone for making an effort to undertake this seclusion, even if not to the full extent owing to extenuating circumstances.

Those individuals who cannot stay for even one entire day but strive to find as much opportunity as possible to remember Allah in the mosque will earn a reward. Therefore, if one cannot fast, but tries to spend time in the mosque and remember Allah, he can get the reward of Itikaaf. In the past, Imams of Jurisprudence have mentioned these situations and have preferred leniency in order to foster the zeal to observe Itikaaf. Hence, whoever cannot observe Itikaaf in the ideal manner can do so at a lower stage and strive to earn rewards for that level of worship.

Can I come out of my room during Itikaaf?

“It’s not necessary that in Itikaaf you only stay inside. You can go on to the roof where due to the sunlight it’s warmer. In the rooms down here it’s cold. You can also speak about essential matters. One should be mindful of what’s important. Every action of a believer (if done with the right intention and bearing the sanctity of Itikaaf in mind) is a form of worship.” (Fiqhul Masih pg 220)

This is a very befitting guiding principle: some become too restrictive with themselves. However, others may take this and become too lenient. It’s best to take the middle path and constantly assess ourselves.

“The Holy Prophet(sa) used to exert himself in devotion during the last ten nights to a greater extent than at any other time.” (Muslim)

Can we leave the place of Itikaaf?

To observe Itikaaf at the highest level, one should not leave the Mosque for any reason other than to take care of pressing needs and demands.

In general, according to Hazrat Aisha(ra), “the Holy Prophet(sa) never used to leave the mosque and enter his residence except to relieve himself.” Therefore, going out to use restroom facilities is a valid necessity. One may also exit to attend the Jumuah prayer service, if it isn’t being held where one is staying. Likewise, if no proper arrangements are available, one may go home to shower or to the marketplace to eat. In circumstances such as these, one may go a far distance but should return immediately after fulfilling the need.

When should I search for Lailatul Qadr?

During the last ten days of Ramadan, there occurs a particular night among the odd nights of this period which is known as Lailatul Qadr in Islamic terms. It may fall on the 21st, 23rd, 25th, 27th or 29th of Ramadan.

Hazrat Abu Saeed Khudri(ra) was asked, “Did you hear Allah’s Messenger(sa) talking about the Night of Destiny (Lailatul Qadr)?” He replied:

“You begin Itikaaf in the mosque on the morning of the 20th day. Sometimes (the period of Itikaaf) lasts ten days and sometimes it’s eleven days. On one occasion, the Holy Prophet(sa) went outside to tell his Companions about the specific time for the acceptance of prayer when he saw two people quarrelling with one another. He said that it caused him to forget the time but said that it can be found in the last ten days of Ramadhan. Sufis have written that this time can come on days other than these as well, but generally during the last days of Ramadan there is a special time for the acceptance of prayer. The Promised Messiah(aa) stated through his experience that this moment comes on the 27th night of Ramadhan.”

What should I pray at the time of Lailatul Qadr?

O Allah! You are the Great Pardoner, You love to pardon. Hence I seek Your pardon (Ibn Maja)

Can you recommend some things that should be done during Itikaaf to reap maximum benefits?

“With the start of the last ten days of Ramadhan, the Holy Prophet(sa) used to tighten his waist belt (i.e., mentally and spiritually prepare for a strenuous effort) and pray the entire night and keep his family awake for the prayers.” [Bukhari]

We should follow this in spirit, but realize we are all at different levels, and we should approach Allah according to our abilities.

Do what you can:

“What are the most beloved deeds in the sight of Allah? The Holy Prophet(sa) replied: “the ones that are done regularly, even though they may be few. He further adds: “Don’t take upon yourselves anything except the deeds which are within your ability.” [Bukhari]

Night of Decree: Better than 83 Years of Life
7 steps to achieve Lailatul-Qadr, the Night of Destiny
Ramadhan and our Responsibilities
Practices of the Promised Messiah(as) in Ramadan
Ramzan and Taqwa
Go to Top
Start Here
Research
Contact Us
Follow Us
Copyright © 2022 Ahmadiyya Muslim Community. All rights reserved.
Privacy Policy | Use of Cookies | Terms of Service | Sitemap
Start Here