Salatul-Jumu‘ah or Friday Prayer is offered in congregation. It is offered in place of Zuhr Prayer. Each week on Friday, Muslims are required to take a bath, dress in their best clean clothes, wear perfume and assemble in the mosque for Friday Prayer. The Holy Quran and the Hadith speak highly of the blessings of Jumu‘ah Prayer. If a Muslim spends Friday in the remembrance of God Almighty, supplicating before his Lord, he is abundantly rewarded by Allah.

Friday Prayer is an occasion for the assembly of the Muslims of a whole city or a town. In a large city, Friday Prayer can be offered in more than one place for the convenience of the Muslim community. It gives them an opportunity to meet together to discuss and solve their individual as well as community problems. Getting together once a week develops unity, cooperation and cohesiveness among Muslims. Friday Prayer is also a demonstration of Islamic equality.

It gives the Imam a chance to advise all Muslims at the same time on urgent matters that face them. The Imam’s sermon gives them guidance in Islamic teachings. Friday Prayer is an obligatory Prayer for every adult male Muslim. However, those who are sick, blind or disabled, those on a journey, and women, are exempt from the obligation of attending the Prayer at the mosque. They can join in the Prayer if they so wish, but if they cannot attend the Friday Prayer, they have to offer Zuhr Prayer instead, as the Friday Prayer is offered in place of Zuhr Prayer.

There are two Adhans for Friday Prayer. The first Adhan is recited when the sun begins to decline and the second is recited just before the Imam stands up before the congregation to deliver his sermon.

The sermon consists of two parts. In the first part the Imam, after the recitation of Ta‘awwudh and Surah Al-Fatihah, advises the gathering to act upon the commandments of Allah and also about the duties they have to perform to become good Muslims. The sermon can also deal with any other matter of importance. This part of the sermon can be delivered in any language.

After delivering the first part of the sermon, the Imam sits down for a short while, then stands up again and starts with the second part which is in Arabic and which reads as follows: 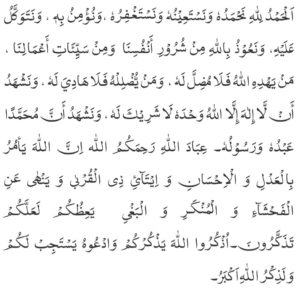 All praise is due to Allah. We laud Him, we beseech help from Him and ask His protection; we confide in Him, we trust Him alone and we seek protection against the evils and mischief of our souls and from the bad results of our deeds. Whomsoever He guides on the right path, none can misguide him; and whosoever He declares misled, none can guide him onto the right path. And we bear witness that none deserves to be worshipped except Allah. He is alone and has no partner. We bear witness that Muhammad is His servant and Messenger. O servants of Allah! May Allah be Merciful to you. Verily, Allah commands you to act with justice, to confer benefits upon each other and to do good to others as one does to one’s kindred and forbids evil which pertain to your own selves and evils which affect others and prohibits revolts against a lawful authority. He warns you against being unmindful. You remember Allah; He too will remember you; call Him and He will make a response to your call. And verily divine remembrance is the highest virtue.

Muslims are required to listen to the sermon attentively. Any type of conversation during the sermon is prohibited. After the Imam has delivered the second part of the sermon, the Iqamah is recited and the Imam leads the congregational two Rak‘at of Jumu‘ah Prayer.

The Holy Prophet(sa) of Islam did not approve of a person telling others to refrain from conversation while the Imam is delivering his Sermon. In unavoidable circumstances, a gesture by hand or with a finger can be made to draw the attention of someone to stop talking. In case the Imam asks something during the sermon, then he should be replied to.

A person who comes to the mosque during the sermon should not steer his way to the front by jumping over the shoulders of the people already sitting. As the sermon has already begun, he can if he wishes, offer two Rak‘at of Sunnat quickly during the sermon. If a person is late for Friday Prayer and joins the congregation in the final Qa‘dah, he should complete his Prayer individually after the Imam has finished leading the Prayer. If, however, he misses the congregational Prayer completely, such a person should offer Zuhr Prayer instead.