Types of Prayers and Number of Rak’ats

There are four types of Prayers:

Fard is an Arabic word which means compulsory or obligatory. There are five obligatory Prayers everyday:

It is sinful to leave out a Fard Prayer intentionally, but if such a Prayer is missed through forgetfulness or due to unavoidable circumstances, then this mistake can be rectified by offering the missed Prayer as soon as one remembers, or whenever possible.

The following Prayers are regarded as Wajib (necessary) Prayers:

If a person misses these Prayers intentionally, he is deemed to have committed a sin. However, if he misses a Wajib Prayer unintentionally, e.g., through forgetfulness, he is not required to offer it as a Qada Prayer. Qada means offering of a missed Prayer.

Vitr literally means odd. There are three Rak‘at in this Prayer. It is offered after the ‘Isha’ Prayer. It is preferable to recite Surah Al-A‘la, Surah Al-Kafirun and Surah Al-Ikhlas respectively in these Rak‘at. However, this is not necessary. Any Surah or verses of the Holy Quran can be recited. In the third Rak‘at of Vitr, after performing the Ruku‘, Du‘a’i Qunut should be recited which is as follows: 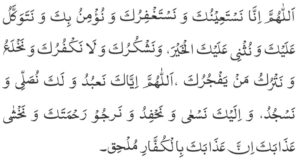 O Allah, we beseech Thy help and ask Thy protection and believe in Thee and trust in Thee and we praise Thee in the best manner and we thank Thee and we are not ungrateful to Thee, and we cast off and forsake him who disobeys Thee. O Allah! Thee alone do we serve and to Thee alone do we pray and make obeisance and to Thee we flee and we are quick and we hope for Thy mercy and we fear Thy chastisement, for surely Thy chastisement overtakes the unbelievers.

Muslims also offer additional Rak‘at of Prayer apart from Fard and Sunnat Rak‘at. These are called Nawafil Prayers or Nafl.

There are some other Nawafil Prayers which are mentioned later in this book.

One may offer as many Nawafil Prayers as one wishes. However, Nawafil should not be offered during the forbidden times for Prayers. For example, they should not be offered between ‘Asr Prayer and Maghrib Prayer. It is preferable to offer Nawafil Prayers at home rather than in a mosque except for those which have been mentioned to be offered in a mosque. However, it is a matter of personal choice and there is no compulsion in this matter.