The Real Source of the So-Called Indelible Mark

The ‘White Paper’ claims that:

Throughout the history of Islam, this concept of Khatm-e-Nubuwwat [i.e. the concept of being the last with reference to time] has been part of the basic beliefs of Islam and has left an indelible mark on the outlook, conduct, and psyche of Muslims. (Qadiyaniyyat—Islam kei liye eik Sangin Khatrah, p. 5)

If you examine the history of Islam, there is no sign of such a mark. As I have mentioned, the Muslim scholars who are amongst the honoured saints, including some of the most highly renowned Sufis, do not seem to have been influenced by this concept. Where did the authors of the so-called White Paper find the idea of the indelible mark. Surely, this mark must be somewhere. As they did not get it from the past Muslim scholars, they must have acquired it from somewhere else. The Holy Qur‘an has pointed out from where they have taken the concept of finality in terms of time. Allah the Almighty says in the Holy Qur’an: 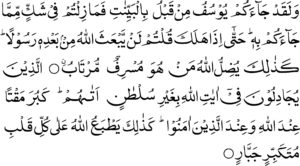 And Joseph did come to you before with clear proofs, but you ceased not to be in doubt concerning that with which he came to you till, when he died, you said in despair: ‘Allah will never raise up a Messenger after him.’

This verse shows that the so-called indelible marks can be traced back to the time of Prophet Joseph(as), but the Holy Qur’an rejects this concept. Continuing in this subject the Holy Qur’an uses the word ‘seal’ and says:

Thus does Allah adjudge as lost those who transgress, and are doubters. “Those who dispute concerning the Signs of Allah without any authority having come to them. Grievously hateful is this in the sight of Allah and in the sight of those who believe. Thus does Allah seal up the heart of every arrogant, haughty person.” (Surah al-Mu’min, 40:35–36)

This is where our opponents got the concept of the ‘indelible mark.’ Allah says that the opponents of Yusuf(as) behaved the same way. As long as he was alive they paid no heed to him and opposed him vehemently. But when he died, they concocted a belief that God would never raise another Prophet. In other words, during the lifetime of Yusuf(as), his opponents denied his claim and, after he passed away, they freed themselves from obedience to prophethood forever [by claiming that there would never be a Prophet again].

According to the Holy Qur’an, this concept has existed since the time of Yusuf(as).

The Holy Qur’an always warns against misguided notions and danger of misinterpretation. It is utterly impossible that anybody could come up with a clever argument to outwit the Qur’an. In Chapter 72, Surah al-Jinn verse 5, the same subject has been described:1

When the jinn were initiated at the hands of the Holy Prophet(sa) and returned home, they talked amongst themselves on the way back:

How stupid and ignorant were our ancestors who fabricated extravagant lies against God.

What were these lies? One of them was:

‘And indeed they thought, even as you think, that Allah would never raise any Messenger.’2

Our opponents today are the victims of the same kind of foolishness as those people were, and say the same thing: God will never raise another Prophet. If, as they assert, Allah the Almighty has now initiated a new order in which the commissioning of a Prophet was to be banned, then why did Allah the Almighty mentioned the above and described as the stupidity of the former people.