A Review of the Pakistani Government’s
“White Paper”: Qadiyaniyyat—
A Grave Threat to Islam

Replies to Some Allegations 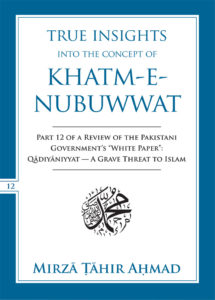 In 1984, the Islamic Government of Pakistan ignored fundamental Islamic decorum by depriving Ahmadi Muslims many of their basic human rights including religious freedom. In an attempt to justify this action, the Government of Pakistan published a so-called White Paper under the title Qadiyaniyyat — Islam kay liyay Sangin Khatrah (Qadiyaniyyat—A Grave Threat to Islam).

Although there was nothing new in this so-called White Paper—the objections in which had already been thoroughly refuted in Ahmadiyya Jama‘at literature—Hazrat Mirza Tahir Ahmad Khalifatul-Masih IV((rh), the then Imam of the Ahmadiyya Muslim Jama‘at, replied to these allegations in a series of sermons. These sermons (in Urdu) were published by the London Mosque in 1985 and the English translation is now being published.

Hazrat Mirza Tahir Ahmad delivered this sermon on April 7, 1985 as the concluding speech of the Annual Conference of Jama‘at Ahmadiyya UK. It details the profound insight and conviction that the Promised Messiah(as) had in Khatm-e-Nubuwwat. By citing extensively from reputable sources throughout Islamic history, he demonstrates that the Ahmadiyya belief in Khatm-e-Nubuwwat is fully consistent with the consensus of the Companions(ra) of the Holy Prophet(sa) and the views held by respected Muslim scholars and authorities.

Read the book in these formats

Amazon Kindle
Table of Contents
1. Copyright
2. Preface
3. About the Author
4. True Insights into the Concept of Khatm-e-Nubuwwat
Profound and Firm Faith in the Holy Prophet's Status as Khatamun-Nabiyyin
5. A Masterpiece of Deception
The ‘Muslim Thinker’—His Status as a Religious Authority
6. Khatamiyyat Encompasses All Qualities of Prophethood
An Enlightened New Aspect of Khatamiyyat
7. Profound Interpretations of Khatamun-Nabiyyin by Muslim Thinkers
‘Khatamiyyat’ Transcends Time
8. Advent of a Prophet within the Ummah is Not in Conflict with ‘Khatm-e-Nubuwwat’
9. A Foolish and Un-Enlightened Interpretation
10. A World of Difference
11. The Real Source of the So-Called Indelible Mark
12. The Meaning of Khatamiyyat According to Ahadith
The Messiah of the Latter Days Will be a Prophet of God
Completion of the Metaphorical Mansion Signifies Perfection of Divine Law
Literal Meaning of the Word ‘Ba‘di’
13. Advent of a Prophet According to the Need of the Time
Another Argument for the Continuity of Prophethood
14. The Real Significance of Hadith La Nabiyya Ba‘di*
Hazrat Aisha Siddiqa’s Interpretation of La Nabiyya Ba‘di
Interpretation of Hazrat Aisha’s(ra) Hadith by Learned Scholars
A Prophet of the Grandeur of the Holy Prophet(sa) Cannot Appear
15. Another Misleading Claim by the ‘White Paper’
16. A Profound Interpretation of Khataman-Nabiyyin
Plight of the Ummah Despite the Presence of the Perfect Book
17. Lessons from the History of the Prophets
18. Need for a Reformer in the Present Age
Cry of the City of Sodom
19. Awaiting the Advent of the Mahdi
20. Who are the Companions of the Latter Days?
21. Other Misleading Statements of the “White Paper”
Liar, on Him Will be the Sin of His Lie
22. Distinction between the True and the False Claimants
The Real Reason for the Opposition of Those Commissioned by God
23. Deliberate Deception in the White Paper
24. Belief in Khatm-e-Nubuwwat and Fundamentals of the Islamic Faith
Belief in Khatm-e-Nubuwwat and its Impact on Civilization and Culture
Islamic Civilization and Culture as Seen by Ulema
25. Nubuwwat within the Ummah of the Holy Prophet(sa)
A Claim Without Evidence
Nubuwwat within the Ummah of the Holy Prophet(sa)
Mahdi and Messiah Are One Person
26. The Second Coming of the Messiah and ‘Allama Iqbal’s View
If Jesus is Dead, How Will He Return?
27. Unfair Attitude on a Well-Established Doctrine
28. Glossary of Important Terms

Other books in this series: A Review of the Pakistani Government's "White Paper"

A Great Victory for Ahmadiyyat

The Magnificent Services of The Just Imam, The Promised Messiah

The Supreme Plan for the Universal Regeneration of Islam

Majestic Writings of the Promised Messiah

Claims of the Promised Messiah(as)

The Founder of the Ahmadiyya Muslim Jama’at

Ahmadiyya Muslim Jama’at and Independence of Kashmir and Palestine

The National Security of Indian Muslims

The True Islamic Concept of Jihad

The British Interests in India and Their Real Guardians

Was Ahmadiyya Muslim Jamaat Planted By The British?

A Deplorable Scheme of Falsification and Accusations

The Seal of Prophets - His Personality and Character

Exalted Status of The Holy Prophet as The Khatamun Nabiyeen