A Claim Without Evidence

The Old and the New Testaments bear witness to the fact that all previous Prophets have invariably been foretelling the advent of the Prophets succeeding them. But, the Holy Qur’an makes no mention of a future Prophet. On the contrary, it contains numerous verses which categorically state that there will be no more Prophets. Moreover, there are several authentic and mutually supporting ahadith which support this view. (Qadiyaniyyat—Islam kei liye eik Sangin Khatrah [Qadiyaniyyat—A Grave Threat to Islam,] p. 6)

I have already answered their claim with regards to the ahadith. As for the Qur’anic verses, it is noteworthy that they have not put forth a single Qur’anic verse to support their claim. As noted earlier, they mentioned some ‘Thinkers of Islam’ and, rightly or wrongly, have quoted them to support their own viewpoint. They have also utilized some ahadith to substantiate their ‘thesis,’ including the one that mentions ‘thirty impostors.’ All these arguments have been refuted by me. They have not put forth a single verse from the Qur’an.

What a grand proclamation. It reveals the unique and lofty station of the Holy Prophet(sa). These verses say that from now on, only those who will ‘obey Allah and this Messenger’ shall be the recipients of the spiritual rewards of the highest order i.e. prophethood, truthfulness, martyrdom and righteousness. Here the word used is not just ‘Rasul’ (Messenger) but ‘ar-Rasul’ (this Messenger) pointedly referring to the Holy Prophet(sa).

Here, our opponents argue that the particle ma‘a means ‘with’ and not ‘among’ as we translate it. Meaning ‘it is they who shall be with those upon whom Allah has bestowed His blessings.’ Anyone with common sense would know that their argument is absurd. A grand divine decree has been announced conferring spiritual ranks of the highest degree on those who obey Allah and the Holy Prophet(sa). But our opponents would have you believe that your reward for obeying Allah and His Prophet would be that you would only be placed with people who have achieved these lofty spiritual ranks.

The Holy Qur’an belies their translation of the particle ma‘a. At another place, we read:

Here the same particle ma‘a has been used, not min. The particle min means ‘from among,’ while the particle ma‘a means ‘with’ and ‘from among,’ depending on how it is used. The Muslims have been enjoined to implore Allah the Almighty saying: ‘Cause us to die with the righteous.’ Obviously, this does not mean that we should pray to die whenever a righteous one dies. This is the height of absurdity.

The fact remains that in the above example, chapter 4, verses 70–71, ma‘a cannot mean anything but min—from among. In Arabic, when referring to more than one person and expressing admiration ma‘a invariably means min— from among. But should the species change, it would not be so. As Allah says in the Holy Qur’an, chapter two, verse 154:

Here the species has changed, hence the particle ma‘a cannot be used in the sense of min —from among.

The Holy Qur’an clarifies this issue further. If you refer to the verse under discussion Chapter 4, verse 70: Among those on whom Allah has bestowed His blessings it further reads ‘among the Prophets’. That is to say:

Those receiving His blessings would be ‘among the Prophets, the martyrs and the righteous’ and not just in their company. The particle ma‘a has not been repeated. min has been used to elucidate the meaning and to eliminate any possibility of misinterpretation. Allah says:

There is another verse of the Holy Qur’an, in Surah al-Hajj, chapter 22, verse 76, which reads:

Allah chooses His Messengers from among angels, and from among men. Surely, Allah is All-Hearing, All-Seeing. (Surah al-Hajj, 22:76)

Our opponents acknowledge that this verse was revealed after it has been pronounced that the Holy Prophet(sa) was ‘Khataman-Nabiyyin.’ Yet the verse says ‘Allah chooses His Messengers from among angels and from among men’ instead of saying ‘Allah used to choose His Messengers…’ This clearly means that prophethood has not been terminated. It is a fundamental rule of grammar that ‘present continuous tense’ cannot be used for an action that has come to an end. I wish the so-called ulema would understand.

A prominent Shi‘a commentator, Tibri, on page 171 in volume 7 of his book Majma‘ul Bayan, commenting on this verse, writes:

Allah chooses His Messengers from angels, e.g. Gabriel and Michael; and from among men, i.e. the Prophets.

Here the reference is not to an ordinary messenger, but to a Prophet. At another place in the Holy Qur’an reference is made to a covenant. In Surah Al-e-‘Imran, chapter 3, verse 82, we read: 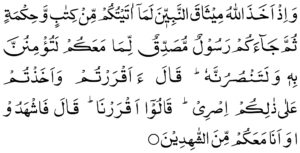 And remember the time when Allah took a covenant [from the People of the Book] through the Prophets, saying: Whatever I give you of the Book and Wisdom and then there comes to you a Messenger, who fulfills the message that is with you, it is incumbent upon you to believe in him and help him. And He said: Do you make that commitment, and do you accept the responsibility which I lay upon you in this matter? They said: Yes we make that commitment; and He said, ‘Then bear witness, and I am with you among the witnesses.’ (Surah Al-e-‘Imran, 3:82)

In Surah al-Ahzab, chapter 33, which includes the verse about Khatm-e-Nubuwwat, Allah the Almighty says in verses eight and nine:2

The above verses are quite clear. It is strange that our opponents still insist that they do not find anything on this subject in the Holy Qur’an. The fact of the matter is that there are prophecies in the Holy Qur’an as I have amply demonstrated above. Moreover, the Holy Prophet(sa) had made unambiguous prophecies about the coming of the Mahdi and Messiah. If you review our opponents’ belief, you would be amazed at how silly and incongruous it is. On the one hand, they insist that there would be no more Prophets, on the other hand, they believe when the second coming of Jesus(as) happens, he would be a Prophet.

They also believe that the Holy Prophet(sa) said:

There is no Prophet between me and him–that is, ‘Isa(as)–and he is certain to descend. (Sunan Abi Dawud, chapter Appearance of Dajjal)

There is a hadith narrated by Hazrat Abu Huraira, who said:

The Holy Prophet Muhammad(sa) said: There would be no Prophet or Messenger between me and the coming of Messiah. Verily, he is my Khalifah in my ummah after me [min ba‘di]. (Al-Mu’jam Al-Ausat, by Hafiz Tibrani)

By this statement, the Holy Prophet(sa) has resolved the issue of dajjals and La Nabiyya ba‘di [there is no Prophet after me]. He points out there will be impostors but do not consider the Messiah an impostor. He will be a Prophet.

Remember, most surely, He (Jesus) will be my successor and will be from my ummah.

That is to say he was talking about a Messiah being raised from the ummah and not the Messiah from the Mosaic dispensation.

Jesus(as) shall descend amongst the Muslim ummah as an arbitrator without a new law. Most surely, he will be a Prophet. There is no doubt about it.

This statement is self explanatory. The ulema assert that Ibn-e-‘Arabi is referring to the old ‘Isa. However, at another place, Hazrat Muhy-ud-Din Ibn-e-‘Arabi, himself says:

Here, note that Hazrat Ibn-e-‘Arabi states emphatically that the Messiah would be a new Messiah and that he will be a Prophet. Despite all this evidence, our opponents would continue to insist that there will be no new Prophet.

We now quote from Imam Ibn-e-Qayyim’s book. He writes:

To say that Prophet Jesus(as) had gone to the heavens at the age of thirty three is by no means correct. Nor has it been handed down to us in an uninterrupted chain of narration. It therefore need not be adopted. (Zadul-Ma‘ad fi hadyi khairil-‘ibad, by Ibn al- Qayyim al-Jauziyyah [691–751 AH], p. 27, Mu’assas- atur-Risalati Nashirun, Beirut, 2006).

Two points have been clearly made here. One, that the narrations being advanced in this context are by no means authentic and acceptable. Two, that according to Imam Shami, these narrations are actually of Christian origin that have been interpolated; otherwise there is no firm basis for them.

These views have been expressed by no less a person than Hazrat Ibn-e-Qayyim whose authority has been accepted by the ‘White Paper.’ He believes that Hazrat ‘Isa will certainly descend, but he will not be the ‘Isa of the past, because he was neither raised physically, nor will he descend physically. All the scholars who have been quoted above were righteous, pious, and had attained the cognition of God. After all, why did they make all these statments.

Imam Ibn-e-Qayyim, who has been cited as an authority, says at another places:

Had Prophet Moses(as) and Prophet Jesus(as) lived (till the time of the Holy Prophet(sa)), they would certainly have been among his followers. (Madarij-us-Salikin by Ibn-e-Qayyim, vol. 2, p. 496)

This is very significant. Imam Ibn-e-Qayyim having bracketed the two names together, is indicating to us that Moses(as) did not live till the times of the Holy Prophet(sa) neither did Jesus(as). This is the same Imam Ibn-e-Qayyim whom I had quoted earlier and who stated that stories about Jesus(as) ascending going to the heavens alive were all fictitious.

Mahdi and Messiah Are One Person

Ibn-e-Khaldun is also held in high esteem by our opponents. He is an outstanding scholar. He says:

Ibn Abi Watil and Sha‘bah have said that there has been discussion about the Mahdi being the Messiah who would be from the progeny of the Holy Prophet. I (Ibn-e-Khaldun) would like to say that this view is held by Sufis, too. They base their view on the hadith ‘La Mahdi Illa ‘Isa—There is no Mahdi but Jesus(as),’ meaning the Mahdi and Messiah would be from the ummah of the Holy Prophet(sa), whereas Jesus was from the ummah of Moses. (Muqaddimah Ibn-e-Khaldun, vol. 1, p. 407)

In this extract, Ibn-e-Khaldun has demonstrated the attitude of a truthful and pious scholar in contrast to the so-called scholars of today. He has pondered over the issue and has come forward with a very profound point of wisdom: The Messiah to come will be none other than the awaited Mahdi, because Jesus belonged to the ummah of Moses, whereas the future Messiah needs to be a follower and devotee of the Holy Prophet(sa).

1 And whoso obeys Allah and this Messenger of His shall be among those on whom Allah has bestowed His blessings, namely, the Prophets, the Truthful, the Martyrs, and the Righteous. And excellent companions are these. This grace is from Allah, and sufficient is Allah, the All-Knowing. (Surah an-Nisa’, 4:70–71) [Publisher]

2 And remember when We took from the Prophets their covenant, and from thee; and from Noah, and Abraham, and Moses, and Jesus, son of Mary, and We indeed took from them a solemn covenant; that He may question the truthful about their truthfulness. And for the disbelievers He has prepared a painful punishment. (Surah al-Ahzab, 8–9). [Publisher]