Need for a Reformer in the Present Age

In short, we agree that the text of the Holy Qur’an is preserved in its original form. No change has occurred. But we do not agree that no reformer is needed in the presence of the preserved Book. This assertion is countered by the Holy Qur’an itself. In Surah al-Furqan, chapter 25, verse 31, Allah the Almighty says:1

This verse depicts the agony of the Holy Prophet(sa) at the sad plight of the ummah. This exalted son of Adam, the life and soul of all Prophets, pours out of his anguished soul before his Lord about the treatment meted out to the ‘most perfect Book.’

The import of these words has been explained by the Holy Prophet Muhammad(sa) himself. He says:

Meaning that, alas, a time is destined when Islam will be in name only and the Qur’an will be seen merely as a book; it will not be visible in the form of good deeds and the moving spirit in the ummah.

The question arises whether such a time had been witnessed prior to the advent of the Promised Messiah(as). If it was, this would be further evidence to demolish the arguments put forth in the ‘White Paper’ that since the Holy Qur’an is intact, there is no need for a rejuvenator.

A distinguished contemporary of the Promised Messiah(as), Nawwab Nurul Hasan Khan, who has also been quoted earlier, writes in Iqtirabus-Sa‘ah, page 12:

Islam is left in name only; the Qur’an in a mere script. Worshippers fill the mosque, but are bereft of piety and righteousness. The ulema of this ummah are the worst people under the firmament of heaven. All mischief emanates from them and passes on down from them.

A staunch enemy of the Promised Messiah(as), Maulavi Thana’ullah of Amritsar expresses himself in a similar way in Ahl-e-Hadith, page 12, June 14, 1912:

The fact of the matter is that we have forsaken the Qur’an. We have formal faith in it but in our hearts we consider it an ordinary and useless book.

Undoubtedly, the Holy Qur’an has remained intact throughout the ages and we have it with us in its original form. There is no controversy over this issue. But the deplorable condition of the present day Muslims runs contrary to the thesis in the ‘White Paper’ that there is no need of a divine reformer to disseminate the Qur’anic teachings and infuse its spirit in the people and to make them enjoy its blessings simply because the Holy Qur’an exists in its original form.

Further evidence of the plight of Muslims is presented by Maulana Abul-Kalam Azad in Tadhkirah, on page 289. He writes, lamenting on the sad plight of those claiming to be followers of the Holy Prophet(sa):

None of these misfortunes or destructive processes has spared the Muslim ummah. There is no evil or wickedness that is not found in its extreme form in these people. (Tadhkirah, compiled by Malik Ram, Sahitya Academy, New Dehli, edition 3, 1985, p. 289)

It is to be remembered that Maulana Abul-Kalam Azad is known as the guru of the Majlis-e-Ahrar. When the Indian National Congress created Majlis-e-Ahrar, he was the real intermediary in the process.

Muslims have followed in the footsteps of the People of the Book and have acquired absolute similarity with them in every way. The prophecy of the Holy Prophet(sa), ‘If the Jews and Christians debase themselves so much that they have to creep into a lizard’s hole, the Muslims would do the same,’ has already been fulfilled. (Ibid.)

Thus the Maulana is confirming that the prophecy made by the Holy Prophet(sa) has been fulfilled in its entirety. Continuing, the Maulana writes:

May our lives and souls be sacrificed at the feet of the Most Truthful One. All that he said came true, so much so that Muslims came to walk in the footsteps of the idolators. Those professing Islam adopted their ways. Once freed from the worship of Lat and ‘Uzza they returned to them as their slaves and servants. (Ibid.)

Yes, we have the Book, but look at the plight of the ummah. They had been freed from Lat and ‘Uzza; but have reverted to their worship. They have become the lowest of the low. What is missing? Obviously, a divine reformer is needed who, being enlightened by God, should purify them and revive them.

There is an uproar that the Muslims have been wiped out.

I ask them: Were they present anywhere on earth.

He continues addressing the Muslims: 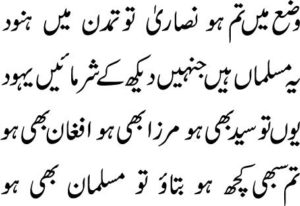 Even the Jews would be put to shame by your behaviour.

You call yourselves Sayyid, Mirza and Afghan.

You may be everything but tell me, are you Muslims? (Ibid.)

Next, consider what Maulana Maududi has to say. The Maulana has passed away, but his Jama‘at is struggling along and enjoys the patronage of the present regime in Pakistan. He wrote:

There is nothing in the Shari‘ah, based on which the Ahle-Hadith, the Hanafis, the Deobandis, the Barelavis, the Shi‘as and the Sunnis can claim to be separate sects. This is the result of ignorance. (Khutabat, by Maududi, vol. 4, p. 76)

The above review proves that the assertion of our opponents is baseless. The assertion that there would be no Prophet after the Holy Prophet(sa) can only be for two reasons: one, there will never come a time that would require the advent of a Prophet. I have amply demonstrated the falsehood of this notion, based on what I have stated from the Holy Qur’an and the writings of their own scholars. Secondly, how can it be believed that the need would arise but God would not send a Prophet? This would amount to saying that (God forbid) the Holy Prophet was commissioned to block the descent of the mercy of Allah. These [corrupted ulema] have no objection to the advent of dajjal, be they thirty or thirty thousand. But they cannot bear the advent of a divinely commissioned reformer.

Cry of the City of Sodom

The question is whether there is a need for the advent of a divine reformer. If the need is established, and our opponents still insist that no divine reformer can come, it would be a grave calumny against the ummah of the Holy Prophet(sa).

Maulana Maududi, reflecting on the status of the Muslims and the need for a Prophet:

The majority of the people look for a perfect man… in other words, they cry out for a Prophet, although orally they proclaim their faith in Khatm-e-Nubuwwat. If anyone believes in the continuation of prophethood, they will do all to silence and destroy him. But in their heart of hearts, they cry out for a Prophet and will settle for nothing less. (The Pamphlet entitled Musalman, published in Shahdara, India, vol. 28, February 1943, cited in Al Fazl, Qadian, vol. 6, March 1943)

How truly, the Promised Messiah(as) says:

In their hearts they agree with us, but verbally they keep on uttering diverse kinds of profanities.

The followers of Maulana Maududi, who are eager to silence the Ahmadis, and the Maulana himself, admit of the gravity of the situation. The vice, the evil, and inequity plaguing the world today has never been seen before. No one except a Prophet can set it straight.

A review of the history of nations, as noted in the Holy Qur’an, reveals that Almighty Allah has never been unmindful of the needs of His servants. He has been blessing them with His warners, rejuvenators and Prophets whenever and wherever the slightest signs of moral turpitude and spiritual weakness occurred. A Prophet was raised to put an end to disparity and dishonesty in weights and measures. Again, a Prophet was raised to stamp out misuse of public funds or personal property.

In short, Allah the Almighty has been raising Prophets to eradicate even minor evils. Why has the way of Allah changed now that there are countless spiritual ills, but the need for a divine rejuvenator is denied. That reminds me of the saying of an English thinker who said that, leaving everything else aside, if we consider the evil of homosexuality, there is great justification for the people of Lot to make a strong protest on the Day of Judgment as to why they were destroyed, but the people of the present age, who exceed them in this evil millions of times, were not destroyed.

New abominations are continuously invented. New ways of oppression, tyranny and injustice are born. Yet, they would say that a divine Messenger is not needed. They would welcome innumerable dajjal, but will not tolerate one who is sent by God for reform.

1 And the Messenger will say, ‘O my Lord, my people indeed treated this Qur’an as a discarded thing.’ (Surah al-Furqan, 25:31)